ON TALENT AND DEDICATION

Today I almost did the first move on the roof project three times in a row. This is exactly like saying that today I missed the first move on the roof project three times in a row. But as a friend once wrote, "Failure is not always failure". The failed attempts of today gave me some confidence about the whole thing, because in boiling temps I almost did this very very precarious move and felt good. I also tried the other moves with maybe a new foot placement that could make some difference. As usual though, after four tries my left pinkie was split. Fairer times.
Then I discovered I may have some chances to do a hard problem that really doesn't suit me at all, a roof that has to be climbed just in compression with hands on both sides. We will see.
One thing really pisses me off: I am fat. I feel fat and weak and this doesn't give me confidence in climbing: I like to have an excess of power, and I like to put it to work. This is not the moment. Luckily the wrist is not going bad and the gym will re-open in two days. Back to work, loser.
Finally, I often think in these days of Olympics about talent. There are a few ones who seem to be on this heart just to do one thing: winning. I ask myself whether those who are blessed with an extraordinary talent feel the same joy, in the victory, as the average ones who just work harder than anyone else. Who knows.
For sure, I will never have the sensation of succeeding in something for my talent, but I know very well the joy of succeeding with just dedication. 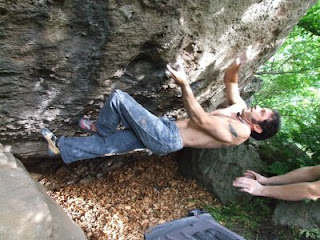