Nothing can challenge your training motivation like a hot Summer. In winter, the bad weather does nothing but push you under the fingerboard, or to the gym, or to the wall to spend three hours on four moves, as I've done plenty of times. In Summer, training with over 30 degrees is really really hard for me: just a few dead hangs leave me worked, the holds on my board are rough and warm and they grate even the Antihydral sort of elephant skin. I do find some kind of fun with the weights. I don't do much, but I keep doing something: usually some climbing orientated work, like one armers (in various forms, with a pause between reps, or with some added weight, or trying to be as fast as possible, and so on), and then some core with front lever pulls (that made a freak of me in the gym, with a group of shameless guys that gather around to see and comment - I don't care much, it's somehow a sort of gratification, but I don't want to be showing off and it's generally quite embarassing, but I want to train as I want to train, no matter what happens around), and finally some snatch pulls (I love this excercise!). Then often there's not much time left, so I do some shoulders, triceps and biceps in sequence to try and burn some of the belly I've put up, then it's shower time.
I am adding weights regularly and this is always good. I still haven't found the courage to properly test my one armers (last year in this period I was at my best level) but sooner or later I will.
On the Beastmaker, I added 4 kilos to all my dead hangs, and this made me happy especially for ring monos. I sadly found out that my pinkies are incredibly weak, probably due to their length they don't get much activation unless crimped, and this makes the pinky monos front lever a very tough challenge. Also, they are so small that I can't keep them from sliding out of the holes, they get no friction or edge whatsoever. Hmm... We'll see. I removed the small bit of wood that I had put in the incut rung to make it smaller, because I found that it was too small to train half crimped and I always ended up almost openhanding: so now it's the normal rung but properly half crimped (or even a bit more than half). The major success came last Saturday, in the form of a repeated one armer on the small pocket, front2. I had one armed that hang years ago, for the essential 7c+ tick, but the one armer proved to be elusive. Saturday I just felt the hold bigger than ever and I just pulled. I checked if I had taken the wrong one but no.
Being in the year with the least training, each progress is quite strange. I think that I just come from two ten years long cycles of training, and maybe I'll be overcompensating for a few years to come. I stroke my chin though.
Rock. Rock. What was that?
I finally put my hands on a route I'd been wanting to do for a few years, and I started thinking back to my projects. Rock climbing is very far from dangling from a wooden hold (not that I dangle at all, when I dead hang, I am solid as a motherfucker), so I fear the rock.
Speaking about more important things, I am still deep into my two jobs schedule, with mornings in Florence and evenings in Siena. Being full Summer though, I can take it more easily. I have lots to study and two very big exams in Autumn: soon enough the long days will be here again!
I have become so politically correct, in this blog, that it's nauseating. Bah.
Posted by lore at 23:28 No comments: 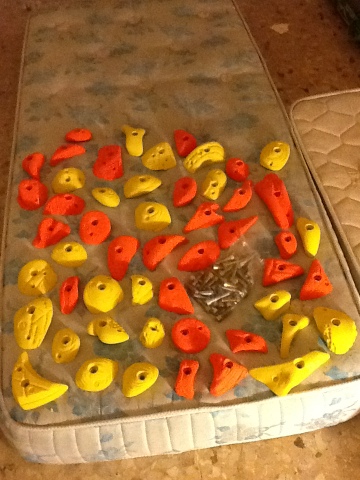 The above image reflects my recent thoughts.
It could seem a stupid idea to buy 50 new holds for a wall that I barely use, but it's not. At least not for me.
Given the recent changes in my life, my two jobs and the lack of time to dedicate to training, everything needs to be closer to perfection than before.
Before, I could decide easily what to do, how to train, for how long, at which intensity, because I had all the time in the world. Now, not anymore. I have bits of spare time here and there, half hours every x days, and therefore I need to extract the most out of that little time I have.
That's why I made my board even better. Because it will help me: the fact that I have little time to train doesn't mean that I'm prepared to become shit. Or shitter, anyway. It's not fucking over.

As promised, a few pics from my sport climbing experience, to give proof that I actually used my harness... Courtesy of Pietro Mittica. 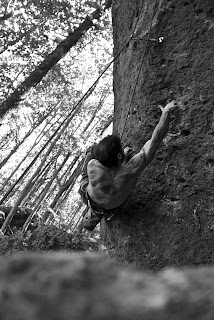 The "easy" first moves: the first bolt is easily at 3 meters, with a nice rock at the bottom of the route. Why that? Had to leave the first bolts preclipped and it was a pain to climb the first part of the route that way, but there was no way I was going to risk a dangerous fall. 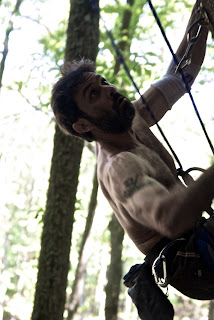 Aiming at the target for the dyno. It's a long pull. 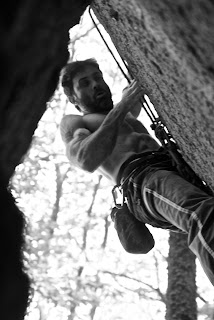 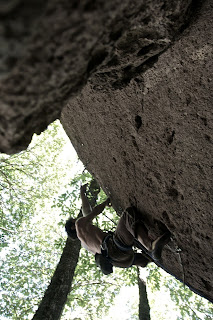 Strenuous clip due to being terrified about doing the move and then easily clipping from a jug. Great pic. 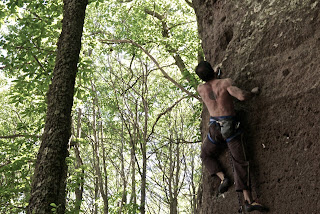 At this point I was needing oxygen, having climbed at least 15 moves for a total of at least 8 meters. Bloody multipitch.
What a great day!
Posted by lore at 11:17 No comments:

What do you get if you take an ageing ex-wannabe and a young ex-bodybuilder sport climbing? I don't know what you get, I can tell you they'll get a lot of fun!
Big numbers baby. 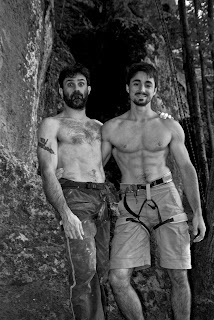