After a Spring made of good climbing on rock (yes, rock, that thing that you find outside instead of plastic and wooden holds), with Summer closing in and temps in the high 30's for weeks on end, my dreams of glory were truly shattered.
I didn't admit defeat, though, before being seriously and utterly defeated.
I went to the Dolomites again with a bunch of friends for a stag do, and once the effects of the first night on the cocktails were over, I managed to touch some rock.
I had my sight aimed at a longstanding project whose line I had finally discovered. I thought I'd done it years ago, but it turned out that the true line was a few meters on the left, completely independent from what I'd done and completely unknown to me.
To cut a long story short, it's hard and I didn't do it. In my opinion it could be around 8a+ or 8b. It's a traverse on the lip of a roof, whose first half is all the hard climbing of the 8a I did in June, and whose second half is probably from 7c up. Brilliant, totally brilliant climbing with edges, slopers and a sequence on right hand underclings that left me completely destroyed. With 25 degrees at the boulders, I couldn't do the middle moves of the 8a anymore, involving a slopey dish, so after refining my sequence I started trying the project from a few moves in. Blimey, despite bone dry holds and good form, I couldn't do it!!! It's hard!
I left emptyhanded, apart from finally repeating a 7a+ that I never found dry in 15 years of bouldering in the Dolomites!
I didn't really leave emptyhanded, because I gained a nice shoulder strain from spending a day on a hard gaston move and behind the head underclings. Obviously, I immediately tried to iron the injury out. Bad choice. On my first set of behind the neck press the sound of a packet of crackers cracking woke me up from my dreams of glory and my right shoulder was useless. Theraband weeks followed. Theraband and weights. Theraband and sprints. Theraband and everything. I managed to train around my injury, tweaked some excercises like the ab wheel and the barbell carry walk. I'd like to share what I found out, training wise, during these weeks of training and healing my shoulder, but I'm a selfish bastard and I won't. You aren't going to try them anyway, so why spend time and types? Fast forward a few more weeks, in which I found out I had progressed on every aspect of my training, from crimp strength, to openhanding strength, to body tension and pulling power, I finally made it back to the Dollys. Three days of climbing, a long weekend to tick my project and finally leave rock for the Winter. No way. Weeks and weeks of rain had done the damage. First day, the roof was dripping. I tried to repeat the 8a and obviously couldn't despite being now able to repeat the part that I couldn'd do in the hot in July. I tried a one move 8a and couldn't do it because of the wet holds. Pads soaked and muddy, clothes soaked and muddy. I ate a lot. Second day, we played around for a while, I napped in the sun, then didn't resist the urge to repeat a problem that I'd done many many years ago. A roofy 7b meant a sure retroflash while waving at the crowd of hikers. No. Four fucking goes were fucking needed. I waved at the hikers though. I wanted to climb a bit more in a nice, sunny, dry spot but I was sure the roof was in good nick, so I resisted. We got to the roof. It wasn't dripping anymore, it was soaked by streaks of water running down and condensation. Got the pad again, walked to the car then I remembered of the sunny spot and headed there (another 15 minutes walking with two pads among the boulders. In flip flops.). Got there. The sunny, dry boulder was sunny and dry at two p.m., now at six it was gloomy, humid and useless as everything else. But I was there. I tried the project. Didn't even find the line or the holds. So I tried to repeat a 7c that I'd flashed in June, and of which I thought I had surely used banned holds or an easy sequence because I really pissed it (pulling very hard). Could barely do the moves in isolation. Oh well at least I cancelled my doubts about my flash. Finally did a nasty 7a+ that I'd equally done in June, only, this time I didn't bother neither matching any of the holds nor putting any weight on my feet. 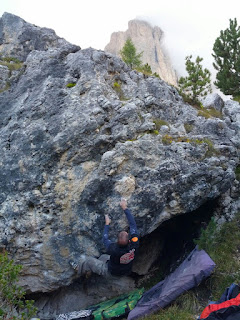 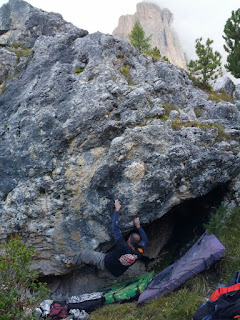 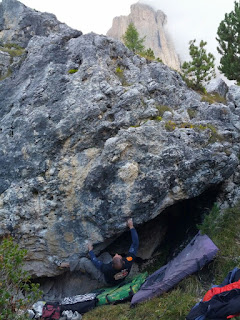 Third day dawned cloudy and rainy. Drove home stopping by at King Rock for a bouldering session. Tired, bad skin, torrid temps inside. Brilliant. Climbed until nauseated. Lesson to be learnt: bad bad planning for this last trip. Got there still tired from the week's training, I wouldn't have climbed the project anyway, probably, even if dry. Now I only have to train, stay in shape for some nine months, and then it will be mine. Do not expect, dear reader, to find much rock climbing on Totolore for the months to come: it's time. The time is almost here to dedicate all my efforts to the only thing that matters: my board. Home of the hardest things I've ever tried, this Winter will be the Winter of Glory. The Winter of the Beast. The Winter that will shatter the climbing world forever.
Posted by lore at 16:20 No comments: