I've been thinking about this thing for years now, and maybe it's time for me to get rid of it by sharing my thoughts. Maybe I find out that I'm not alone.
As it's easy to imagine, I've spent quite a lot of time in climbing gyms during the last ten or fifteen years.
It seems to me, that many Italian climbing gyms suffer from a very clichéd behaviour.
The usual pattern, at least for the gyms that I've regularly been to, is that a strong climber at some point decides to open a gym, or to go and work somehow at an existing gym, maybe setting, maybe coaching.
Let's not take into account, for the purpose of this post, the not so irrelevant aspect that many of the guys who do this aren't qualified neither to set nor to coach. I mean, officially and legally qualified. Like, they attended a course, passed some sort of evaluation, got a qualification.
Let's not take into account that many simply apply to others the kind of training that worked for themselves, without reflecting over the circumstance that they may have been training for decades and are not novices that want to go from 5c to 6b.
Let's overlook this all.
What always left slackjawed, is the fact that, in the gyms that I know well, there is always a star, a leader that all the climbers worship.
I am always shocked by how everyone seems to be needing a boss to which refer, and whose words are thought to be taken as absolute truth.
I've seen things, that you people wouldn't believe. Groups of beginners destroying themselves on a campusboard for hours and weeks on end, because the rock star gave them a training plan. 14 years old, 40 kilos talents ripping their muscles with weighted pull ups, because the rock star wanted to test their strength level before coaching them. Groups of 10 novices following the rock star like dumb prisoners, each one with a crashpad on their shoulders, as the leader tries all day his dangerous projects, brushing a couple of rocks nearby to make the children play when off spotting duty.
I've heard every kind of amazed, adulatory and self depressing comment about the leader: "I'll never be as strong as he is." "He could be in the national team if he wanted." "Only he, can climb this." and so on.
I despise this servility.
A strong climber that operates in your gym, is just that. He's not a leader, a life guru, or someone to worship. He could be someone to admire, if he deserves it, and when he deserves it.
I wonder why these people always need a chief.
To me, climbing has always been about the highest form of individualism, a radical behaviour that follows the rule that you are always alone on the rock. You may be tied to another person, but when climbing, you're alone. You're alone because you only have the responsibility of your own actions, and of the consequences that those actions can have on the other person.
We are always alone on the rock: if we want to kick down a rock, we can do it; if we want not to clip into the bolts, we can do it. Because we are alone and no one can stop us. But if the rock falls on the head of someone, or if a nasty fall puts everyone at danger, it's only our fault. There's no sharing in climbing, there is only putting together small bits of individual effort. We share the experience, but not the climbing.
This individualism was immediately evident to me, because before starting climbing, I'd always participated in team sports.
All I knew was that everyone was stronger than me, everyone was better than me, and that I wanted to become stronger and better than all those people.
My friends and everyone who was stronger than me, were more targets than role models. I copied what they were doing, maybe even their attitude, but only to have an easier target to destroy.
They were still friends and brothers in real life, though.
Even now, despite struggling to stay attached to the sport with everyday's life committments, I have no gods, no leaders, no models.
There is a huge difference between esteem and idolatry; between matter-of-factness and self-deprecation.
I don't know what people like in this attitude. Maybe it's because they think that some of the leader's golden dust will rub on them. Maybe it's because they like to shine with mirrored light.
In doing so, they accept and embrace mediocrity, because they accept that they will never be as good as their duce, their leader, their god. They could progress, but... they will never be like him. Or her.
I would like that these people kill their idols.
I would like that they shine of their own light, strong or feeble, but theirs.
I would like that they say: fuck you I'm not spotting you all day and carry your pads.
I would like that they take the risk of wanting to get stronger and better that anyone else, or at least as strong and as good as humanly possible for them.
But no, for them it's better to be part of a crew. It's better to hide behind a star and be happy to be their friend, their follower, their crashpad caddy, their belay slave.
I don't even want to spend a word about the other side of this Janus' mask. The Leader, the Guru, the Star.
Jesus fucking Christ, guys. Get a fucking grip. Have some dignity.
Be great, be shit, but be yourself and not a pale face in the crowd of worshippers. Become your own god. Become your own model. Become your own target. 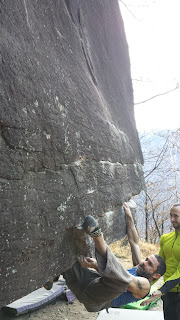 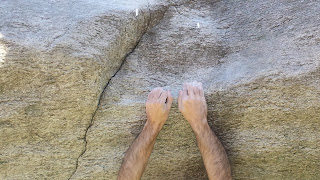 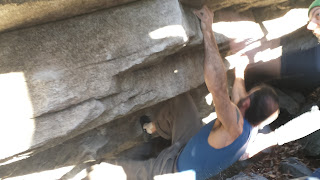 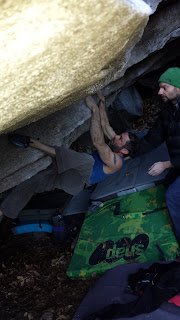 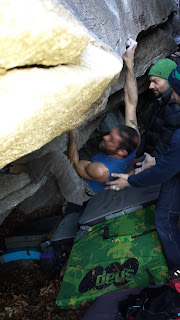 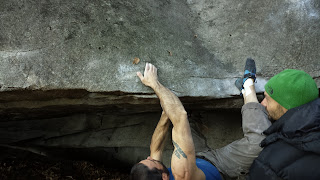 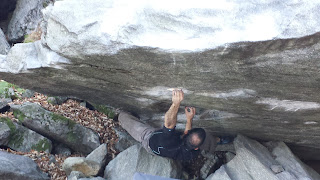 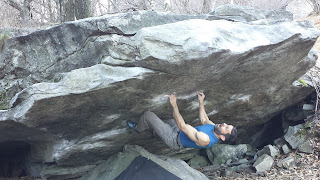 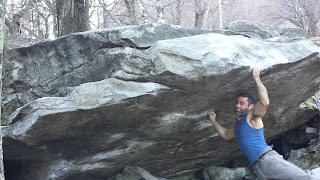