Once again at a friend's house, once again at Stanage, once again at Parisella's cave, once again at the pubs, everything is apparently the same, yet it's completely different.
I wasn't sure I could be doing this trip until the last days before leaving, due to a physical problem that gave me a real bad time and stopped my training for the first three weeks of February.
But I made it, in the end.
I came over with some other friends apart Michele this time, and when we dropped our pads at Plantation, I felt not only at home again, but also something very very new and different, whose origin I found in last year's successful trip: I was feeling happy.
I didn't want to try anything in particular, I was just happy to show my friends around and watch their smiles. This has been priceless.
I wanted to do Brad Pit again and I couldn't, to be honest at first I didn't even manage to heel hook and this left me shocked; my usual thought "It's time to quit" appeared again. Then I tried it again after carefully watching others try - or lap - it, and I realized that five months of face-on bouldering on my wall couldn't be translated into this problem. I carefully chose my position and did the heel hook and the cross easily. Maybe I won't quit yet.
On that occasion I realized also that I made a big schoolboy error this time: I only brought new shoes. My Solutions are so tight that I can't wear them without a plastic bag, and the heel rubber is still so new that in the cold of Stanage didn't ever stick to the sloper. I had similar problems at Parisella's cave, whose strange placements I could not feel with new, stiff shoes. But that's another story.
So yes, I was happy. I was happy also the following day, when a soaked hold hindered me - but not Rich - from doing Lou Ferrino. A true crusher would have crushed it anyway. I did it into the third move, fell, dried the hold then went to the end . One to come back for.
Yesterday was a gorgeous day, I walked around Liverpool, had a haircut, chilled out, ate a lot, and I also visited the Cathedral's tower. Last year I found the tower closed for works, and I was very disappointed; I thought "When will I have another chance to see it?". Well, I don't believe much in second chances, I believe that one can simply try again. This is a very stupid thing to say, but I think there's a great difference between thinking in terms of "chances" and in terms of "trying again": in the first case we wait for something to happen, in the second case we want to make it happen.
What do I want to make happen again? I still want to climb Brad Pit again, but I also want to finish Lou Ferrino and Jerry's Traverse at Stanage. I want to keep visiting my friends and I want to make them come to Italy. I want to keep training and believing that I am not the shittest climber I've ever seen. I want to keep the faith in my projects and become a better teacher.
I also want to start deadlifting.
I am close to the end of five weeks off work, and again I cannot help but think about how hard I fought to find myself in this position. Many people around me supported my decision, and thanks to them and to that little bit of foolishness and luck, I never had to ask for a second chance.
Posted by lore at 11:30 No comments:

FEET ON THE GROUND! 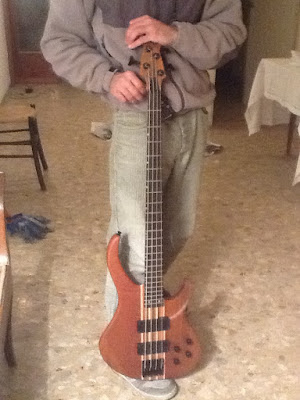 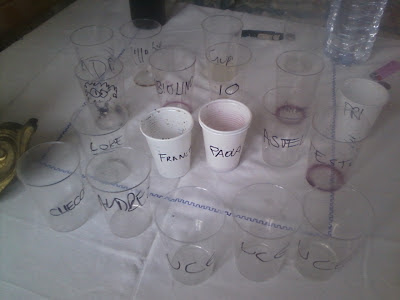 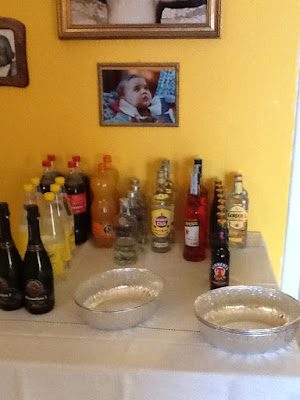 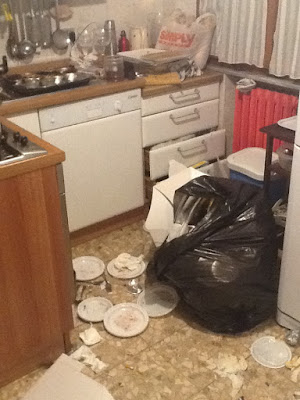 In the pics my new bass and some wonderful moments, pre and post party.

I think that my latest entries were too serious and presumptuous, but I am a presumptuous bastard, so I guess that's normal.
Anyway, I am two weeks into my holidays and things have been a bit hectic, at least in my mind.
I have been trying to arrange a trip up to UK, but until yesterday it was very unlikely; this drove me crazy because I felt absolutely useless. Then it snowed, and snowed, and snowed.
I found myself buried at home: temps ranging from -3° to -11°, closed roads and boulders covered in snow didn't help me in maintaining my self control and Italian aplomb. At moments I almost went crazy. After a few days of forced rest, and just before throwing furniture out of the window, I decided to break the spell and found myself under the Beastmaker, with my weightvest on. What a glorious decision!!! A great session, my first one with 5 kilos on, and it literally made me happy.
I still don't know how the Beastmaker works, after a layoff it seems like that one is still progressing, and it takes very little to regain a personal high even after a long time off it. Anyway I completed all the 6 prescribed sets on the 10 chosen holds; I surprised myself by hanging the 45°, the index monos, the slopey pockets and all the other ones, a real big step forward.
A good Beastmaker session for sure is miles better than Prozac.
This session left my forearms a bit worked, and after a rest day I decided do lift some weights, so I went to the gym and found out that I haven't lost much from August, when I worked out for the last time. Oh well!!! I went back home in a freezing wind, trying not to kill myself on the iced snow, only thinking about a big chicken meal and my comfy bed. It wasn't to be: from the road all the lights in the house seemed off, and when I opened the door I saw the shadows of many people singing "Happy Birthday" for me. My girlfriend had spent the last two weeks organizing a surprise party!!! I was truly shocked and for a good quarter of an hour was unable to really comprehend what was going on!!! It's been a great night with lots of friends, food, alcohol and presents!!!
In the following days I did some cross training under the form of shoveling tons of snow from my road to warrant me some mobility (to where I didn't know).
As I found out that climbing was out of question, with short one day windows of good weather between snowstorms, it was time to train again.
I still hadn't completely recovered so I knew I didn't have much volume, and I opted for one arm max hangs.
I did some tests and found out good improvements: I set a PB on the big rung with both the left and right arm (10 seconds with 14 kilos with the right, twice); and I also managed two very good right hand hangs of the small pockets with front2 (that's 7c+ in the charts bitch!); I did many other sets especially on front2 and mid2, to finish off with some max hangs on the incut jug (whose depht I reduced putting in some cardboard); then I was too tired to do anything else, but today I don't feel much tired, so maybe it could be possible to do another session.
As you can tell, this post is quite meaningless, if you A) don't have a Beastmaker (I pity the fool); and B) you don't like training; and even if you tick both boxes, it still does not say much.
What I can tell is that I really enjoyed these last sessions, and I'm sure I'll reap what I'm sowing. And I'm not sowing the seeds of love, mind.
Finally, some glorious moments in full video galore.