SIGHS, SELF PROMOTION AND A RANT

Quite unexpectedly, and contrary to all my efforts, I am longing to go climbing outdoors. Yes, you had it right: the real thing, the rock. That stuff.
Quite often, in the last weeks, while studying Civil Law wearing my still new, undersized Five Ten Team, I've found myself walking in Alpine settings in my mind, surrounded by granite boulders and high pine trees. A heat wave that got to 39° (it's just June, goddammit!) made me explode in huge sighs at the thought of how cool - in both meanings - it had to be in the mountains. I downloaded the guide of Magic Wood.
It seems that after all, rock still appeals me.
And this brings us to the main event of today: in the late evening I'll have an MR to check the damage I made to my left inner meniscus. I'm sure it's serious, given that each time I warm up and try to squat a little bit more, I definitely feel something moving and squeezing inside my knee. A painful and unpleasant sensation.
End of the sighs, bring the self promotion.
In a previous entry, I confessed my worries about one armers: I wasn't feeling strong and felt the urge to test them. Training one armers proves to be a tricky matter every time I try. I have a pull up bar at home, but it's in a door frame and I don't have enough room to twist my body; my legs always hit the wall. The same can be said for the Beastmaker. I tried to build some kind of handle to hang it from the board frame, but still there's the wall on one side, and the steepnees of the board doesn't allow any leg space. The device I prefer, that comes under the form of a big, flat wooden edge (I prefer it to a normal pull up bar, don't know why. Maybe because my wrist stays more straight and doesn't flex), sits in my garage, where unfortunately my dad parks his car, of which unfortunately I have no keys (my father is smart).
So, when his car is there, I can't train because there's no room. And it's always there, because my dad never takes the car.
A couple of weekends ago, my parents went to the sea, and when my father dropped me a message I immediately knew that I had to make the most out of the chance.
Doubtful and trembling I warmed up, trying to put an emphasis on big recruitment more than pulling force. I did a few lock offs and some HIIT. Then I went down. I took it easy and felt good. So I tried, with the idea that I was going to perform poorly, but also with the desire to use this test as the starting base for future training.
It turned out that my worries were a bit excessive, as the video shows.


I am very psyched, even my left arm felt good with three/four one armers. There's no video of it because I need to stop my body from twisting using my right hand on the beam - an old, badly healed collarbone fracture makes my left shoulder girdle very weak - so it's not a good sight and probably it takes some weight off also.
With proper Summer training things could become very interesting.
Then: last Friday I won my first trial, the first one I followed from start to finish. It's been epic, from sleepless nights full of worries, to a proper fight in Court, with the judge nearly kicking me out so furious I was. But then I crushed the fuck out of the other parts: one was a Public Administration and the other a company that is the collection agency for taxes, that was condemned also to pay our expenses. Fuck you bastards: see my guns and hide! 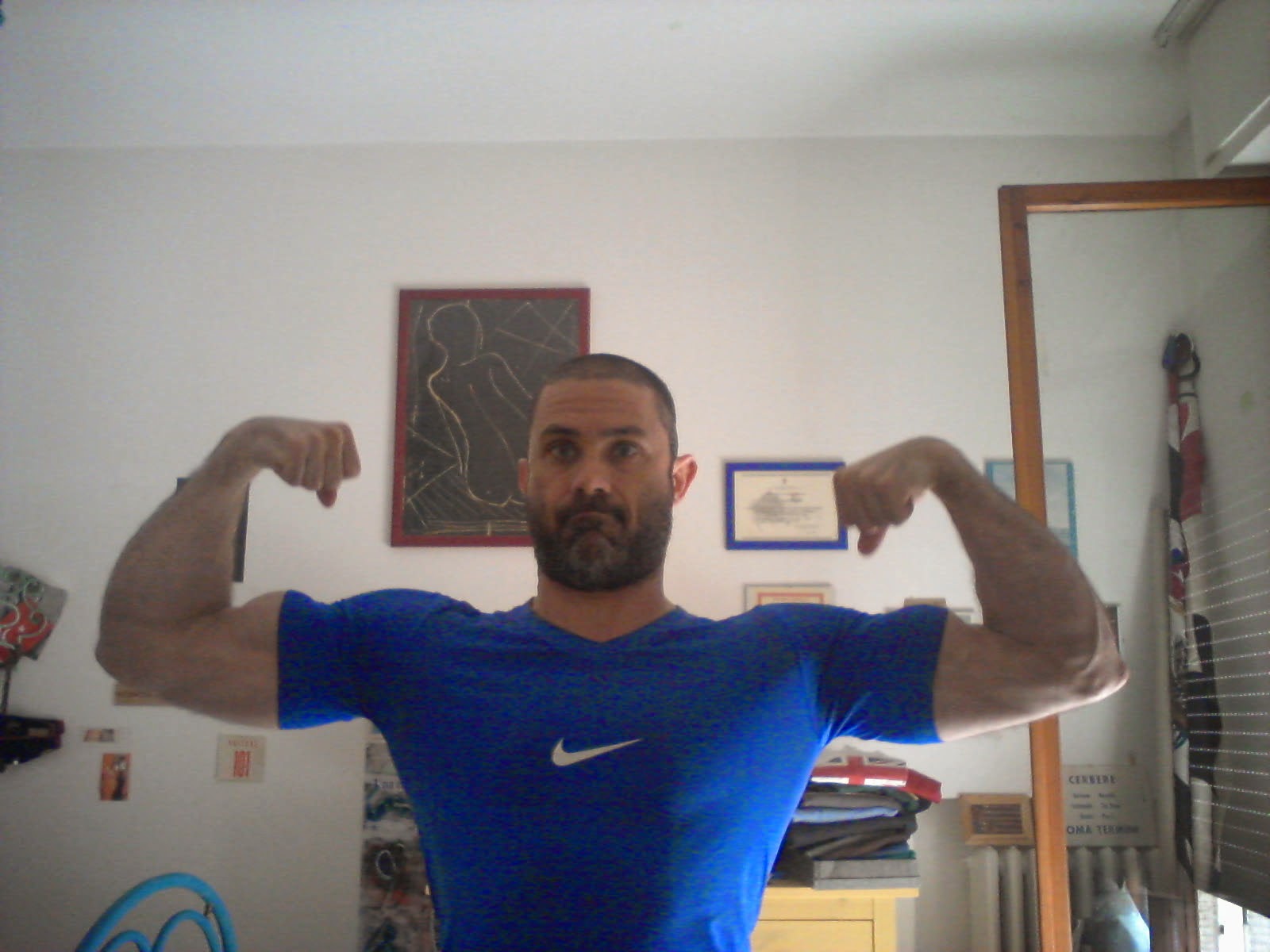 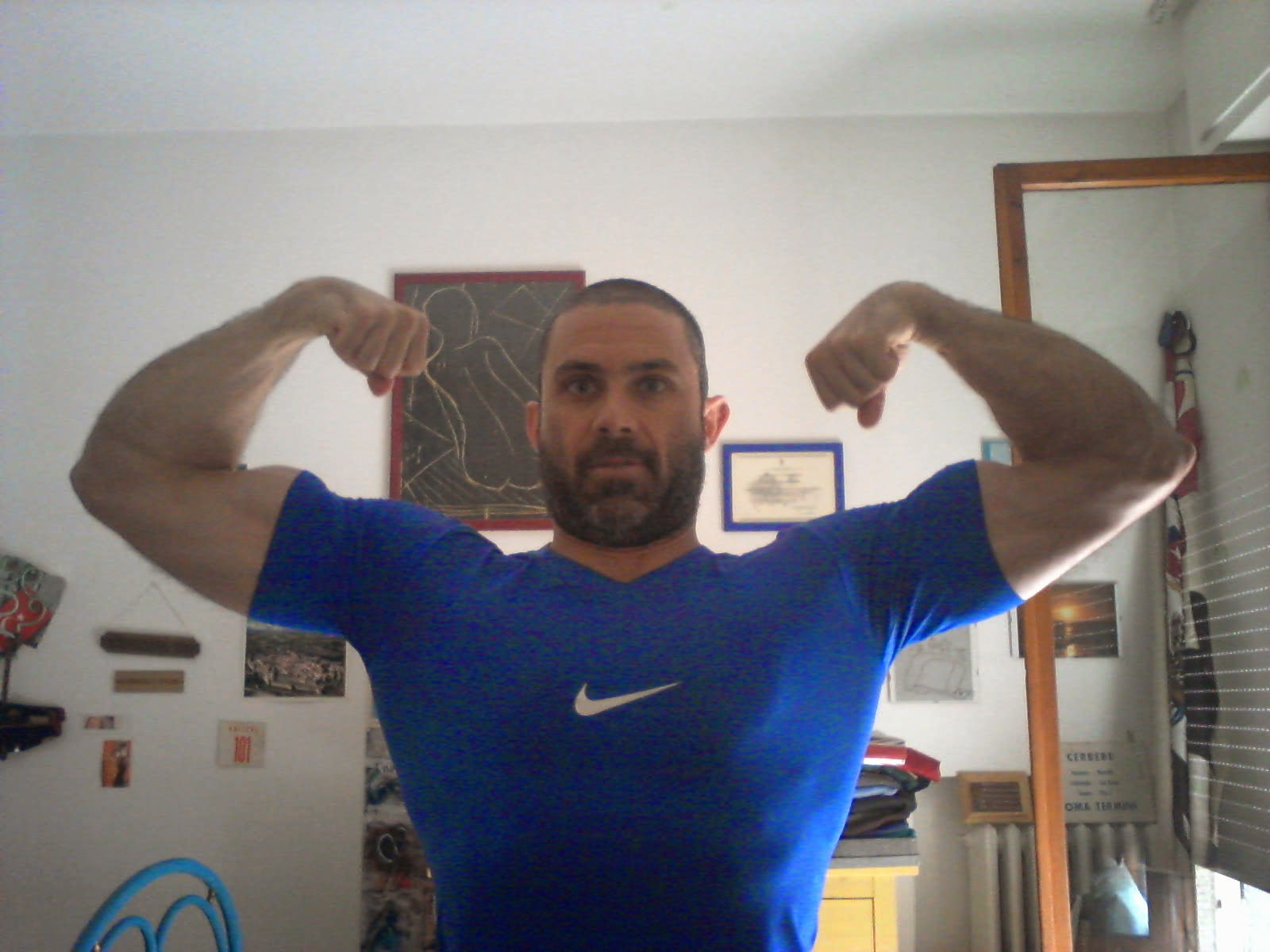 In the pics: a few Nike athletes are going to need a new job. Of course I wasn't dressed like this in Court.

End of self promotion, on with the rant.
I've bumped into this picture: 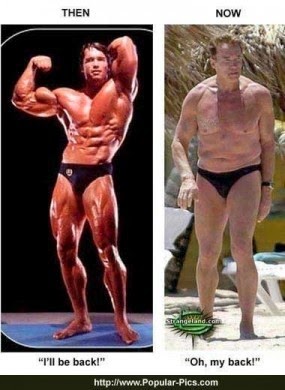 Everyone, has bumped into this, or a similar one. They're used to make fun of Arnold, and of those who dedicate themselves to the cult of muscle. The aim is to show how these things are temporary, how we are all subject to Mother Nature's laws.
Well, thanks for nothing, assholes.
The idiots who post these pics, do not understand that once you've been good at something even for a day, that day will remain forever in your life as an asset, as a success, and as a treasure. The fact that it's temporary - like everything in life, life included - it's just a lame excuse to sit there and become fat and ugly before time, accelerating the ageing process, instead of slowing it down.
Motherfuckers that never were good at anything even for a single day in life. Arnold, and many others in many disciplines, from sport to culture, to art, were the best or tried to be the best in their fields for at least one day. And this is all that matters.

One, of the many things that really piss me off about having broken my meninscus, is not being able to sprint anymore.
I'm getting older and it's getting harder and harder to keep good form, so every possible activity is welcome. Every possible activity that contributes to power and burning some fat, in this order of importance. Regular cardio, steady state or not, is not welcome.
If you ask yourself why you should not do any regular cardio, refer to the font of all information, T-Nation. The concept of "skinny fat", however, should clarify everything, and should keep you awake at night and make you tremble during the day, for the fear of becoming one.
So, I can't sprint, but that doesn't mean that I can't perform other high intensity excercises.
Yesterday I did this routine of five excercises: spider crawl (+6kg), skip, gloves, snatch high pulls and front levers; each one - except the snatch high pulls - consisting of six sets of 10" max efforts, with 30" intervals.
It was fun and I'll be doing it again. Fun means horribly hard. I didn't puke but was close.
But not so soon. DOMS are kicking in already and I feel as if I'd wrestled an M1 Abram tank at full speed. And won.
Do yourself a favour, do some high intensity training.
Videos below.