Pressure, pressure, pressure and more pressure.
In many ways. I'm under pressure at work. I wanted to take this friday off, but to the contrary I have been given another class for that day.
I'm under pressure with my girlfriend, I want to climb hard shit without losing her. I don't know what's going to be the harder task.
Pressure is very high also on the weather matter. Incredibly high. One of the best weeks of the season so far. Sunny skies all over, especially in the Dolomites, with gentle winds blowing gently on my Nemesis. I am stuck at work and I deeply envy all the lucky unemployed ones cranking their asses off.
Finally, I am under pressure climbing wise. If I can't go to the Dolomites this weekend, or if I go and can't climb the problem, I will have to start waiting for June again, because next week the snow will come once and for long.
It's a threatening thought. That's why I'll go and I'll do the problem.
Posted by lore at 13:51 2 comments:

I have been chosen to prepare two students of the school for the 6th and highest level of Italian, so that they will firstly take the school's degree, and then they will have the exam of Italian as Second Language, that is called CILS, which is the official degree for foreigners regarding Italian language, being held in Siena by the Università per Stranieri. It's a tough exam, including many different tasks, from usual grammar tests, to written essays, to different tests of listening, comprehension, and so on.
Naturally, I am happy they asked me to prepare the girls for this exam, but there's, as usual, a price to pay.
First, to teach this class I have lost my conversation class, this meaning that now I teach four hours of grammar every day. Second, I've never prepared the students for this exam, so I feel pretty under pressure, a bit like having to pass the exam myself. Finally, the exam is held in December, and this means that I won't be able to have any holiday from now until the end of the year. I never thought about refusing the teaching opportunity, but then I realized this drawback and and well, it didn't make me very happy. In 2009 I've taken an amazing total of four days off, enabling me to ask for Japanese citizenship.
Say goodbye to my Uk trip, say goodbye to my Swizzy trip. Say hello to rushing weekends to the boulders, long drives on Friday nights, long drives on Sunday nights, two raging days of pulling.
Still I don't feel ready to start a structured training plan, I keep pulling in the gym, but I started feeling the magic fading. I am running low on setting creativity, until now I have set many problems, nothing particularly hard, that I have been able to climb in one or two sessions. I feel my arms and core quite strong, again nothing special, but decent. I feel my fingers weak, not in an absolute way, but not as strong as I'd like them to be, especially when full crimped. I want them to be so strong that no hold will ever be too small.
Last, but definitely not least, I hope I can steal another Dolomites trip before General Winter comes; chances are low, but who knows.
This makes me a bit sad now.
Posted by lore at 20:13 No comments:

I didn't do the problem. This is the fact. Now if you like, you can stop reading, because after the facts, there will be the thoughts. If you're interested into knowing my thoughts on the facts, go on.

I wrote it was time to deeply look inside myself. I've done it, and despite feeling very sad at the moment because I couldn't climb the problem I wanted to climb, I think I have to be happy about what I found in the dephts of my person.
I found out, once again and for sure, that I am dedicated. I drove 419 kms all alone on a friday night, in a small car filled with crashpads and with no car stereo, to go to the Dolomites, to climb a boulder problem that I have tried once one year ago. I've experienced many different feelings. During the drive, I surprised myself because I wasn't bored, I wasn't tired, I was sure abouth the choice. I was happy, I had raised the bet and put everything I had on the table, and I was confident of the victory. Well, I can't find my victory in the climbing, but I can find it in my attitude.
Yesterday morning, when I was carrying three pads to the boulder, in a freezing wind, without a single soul in sight in the whole mountain, there wasn't another place in the world where I'd rather had been. I was there with my whole body and mind, and I was very very happy. The rock was frozen, dry as hell, my skin was perfect, my form was perfect, my mindset was perfect. I was happy because I was feeling the purity of what I was doing.
I encountered a number of problems though.
First of all, one session a year before is not enough to perfectly memorize a sequence, especially for the footholds and the body positions. I had to do it all again. Then, it was so cold that the rubber didn't stick well to the rock, so I needed to have a few warm up laps to get the wheels on temperature. Then, the two crux moves are damn hard: I am happy though, because this time I could do them with different, more basic sequences, namely just putting my feet on very low and distant footholds and using alot of body tension, and this is something that I couldn't do last year, meaning that I had to use two horrible, contrieved and dangerous drop knees. Simply put, I just felt stronger. Finally, the wind dropped and it started snowing. It was so beautiful.
Then, here it came my mistake.
I tried another sequence. Tsk tsk, amateur. To get a better hold with my right hand, I had one go using another starting sequence, and I nearly did the problem, but on a hard right hand crimp that I didn't use with the normal sequence, I just ripped my index finger. My skin was so dry that it ripped just where it plies, on the first pad. I knew it was all over, so I instead of taping it I decided to go for broke, and had my last go. I fell and my finger was deepley cut. I started packing, and with the snow quickly covering the boulders, the trees and the road, I decided that I was leaving the mountains again to their winter, in peace for another year.
My finger was unable to climb, I was afraid of getting stuck in the snow with my small car, and I wanted to get back to my girlfriend at home. After just a couple of hours, my proud adventure, my moment of glory and happyness had already ended. I drove down the pass in the snow, then in a second it was the motorway, then home.
I'll never stop saying it: the dedication is a reward in itself.
Posted by lore at 13:42 2 comments:

THE LORD OF COLD

It's currently freezing here. Clear, blue, sunny skies, cold air. I will go to the Dolomites. More than 150 days have passed, not it's time to look inside myself. Deeply.
Posted by lore at 14:09 3 comments:

I will follow the lines that both Stu and Chris have written and I will try to understand why I don't want to diet.
The thought of dieting has crossed my mind many times since when I started climbing, and from one of these times it stayed in my mind for a few years, sadly accompanied by a very unpleasant friend, an alimentary disorder. For some years in the past I have been obsessed by food and body fat percentages. It's been a dark, dark period and I have suffered alot.
Well this is one of the reasons why I don't want to diet now, even if just for short periods. For the same reason, and its name is fear, I don't want to start running or jogging again. I don't want to get sucked back into troubles. I tend to extremes.
Then, the other reason is that I want to climb harder permanently. I can't diet permanently, but I want to improve permanently. When I will feel that I can't improve anymore just by training, maybe I will start dieting, but I don't see this happening soon. So I want my arms and my fingers to become stronger not because they have to bear less weight, but because they can bear more weight.
I respect those dedicated ones that choose to diet, some of them even permanently, but it's something that I don't dare to do.
I want it to be clear that this is my personal point of view, and that in no way I judge others' behaviour. I thank Stu and Chris for helping me clarify this with myself.
Ciao.
Posted by lore at 19:02 No comments: 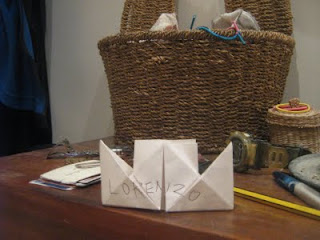 Thank you, Giulio. Good luck my friend.
Posted by lore at 20:07 No comments:

Tome came and went away. I am happy that this time the weather was very good, enabling us to pull on rock for three days in a row, probably even a bit too much for the skin, especially with a fourth added day on plastic at the beginning of his stay, a four hours session in the gym, both of us fueled by protein bars and the students from my school on a free practice day.
I have to say that the monday morning, alone again in Florence, I was very sad. Luckily the students made me smile.They are a blessing: whenever I speak about work with my father, his only concern is about how much do I earn. Well, this week I earnt a letter from one student, plied as an Origami. I obviously won't go into the details of the content because it's very personal, it's enough to say that I know that I've helped a young guy in his stay in Italy, and that I have a new good friend. This is more than a big cheque, but I know my father won't understand. Sometimes we tend to forget that especially with young students we are not only teachers, but educators. I wonder what they will keep of their Italian stay in many many years. Will it be the verbs conjugations or will it be a friendly look from their teacher? And what will I keep of their stay? Will it be the red errors marked in their final tests, or will it be the feelings while reading a text message sent before boarding on a plane? We all know the answer and I feel lucky.
Climbing wise, I am very sad because all my plans of going climbing in the next weekends seem to have to be postponed again and this pisses me off. On the good news front, I have spent many good sessions in the gym pulling holds, and the last two days filming the exercises that will be feature in a DVD that will come soon with a new training manual. Stay tuned and book the seats for future slideshows around Europe.
Last but not least a big waddage to Donato Lella for being a true monster and a very funny guy.
Posted by lore at 18:06 No comments: