I am mad for my board. It's mine and it's the best. Most of all, being mine, it has my rules. If you come here, and you want to touch it, you have to follow my rules, you can't do anything about it.
I am training regularly since completing it, the last weeks have seen three sessions on plastic, one easy day on rock mid week, and one "serious" day on rock in the weekend. I have put the Beastmaker aside for the moment, the last sessions on it had been very hard and my back 2 were a bick achey.
My training on the board consists in setting an easy problem, a harder problem to be completed in the session, and a project for the following session; to the present this has worked fine, I stuck to the program and pulled as hard as I could: the texture of the holds is still pretty rough, they have excellent friction but sessions can't last long because of skin. Anyway I can't last long either but I keep intensity quite high.
I keep focusing on core tension as usual, and I alternate shorter snatchy moves and long pulls.
I am satisfied, even not entirely, by the holds selection: I could not see them before, so I had to trust the manufacturer when I gave him the board details, and to be honest he sent me really nice holds, maybe a little bit too good for my likes, but the plan is to soon place 1 cm thick foot jibs and to ban the use of the holds as foot holds. This should sort things out, 1 cm is small, especially if they are perpendicular to a 53° board.
I've been having a project from the last four sessions now and it's hard. Want to climb it tomorrow, today it was simply too hard.
And there you go a little video.
Posted by lore at 20:09 3 comments: 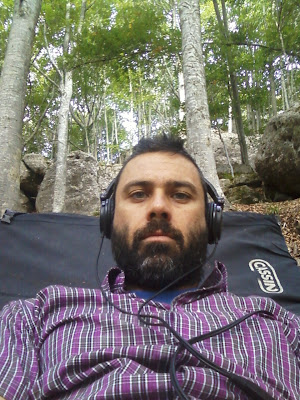 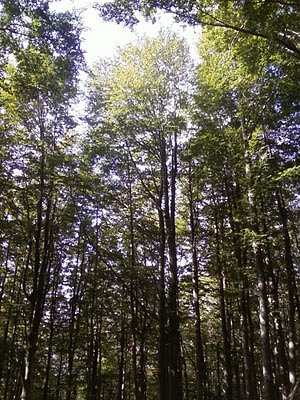 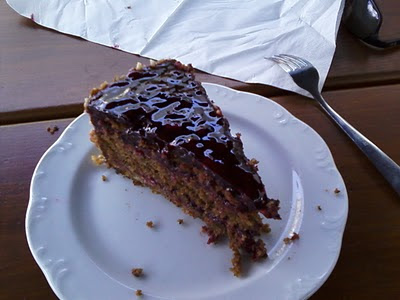 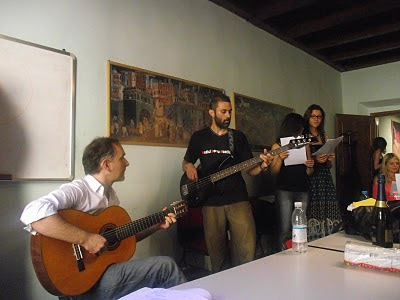 Here you are a few pictures from a finally cold Amiata top, from the Dolomites, from a day at school, and the first moves on the completed board at home. They pretty much cover the majority of my life.

I rarely have been so happy about the arrival of the fall. I know that when I'll get up in the next months and it will be cold, dark and wet, I'll probably change my mind, but for the moment I enjoy the freshness in the air, that yesterday made me cling to the rock effortlessly.
It's addicting.
Posted by lore at 17:49 1 comment: 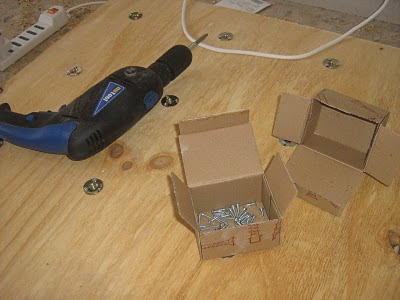 The board is almost finished. Yesterday, in an endless afternoon, I put the T-nuts on, with 1080 little screws. I had 360 T-nuts, and each one has three small holes for three little screws. That's why I drove 1080 little screws in, yesterday.
When buying the stuff, a few people, included the guy I bought everything from, told me not to buy and place three screws for each T-nut: after all, it's not going to be reset as often as a public wall, and being private it will suffer less abuse (ahah, they wish...). They said two screws were more than enough.
I refused and bought and put three little screws for each T-nut, because I am sure of few things in my life, but I'm sure that I want to do this job just one time, and the best way to do so, is to do it RIGHT the first time.
I don't want to be driving more little screws anytime soon or not: that's why I wanted all the screws in.
Whatever the task, there are only two ways to complete it: the right one and the wrong one.
I can't be sure that any of the T-nuts won't break or any of the little screws won't move or who knows what.
But the only way to do my best to do it right was to put THREE FUCKING LITTLE SCREWS FOR EACH T-NUT.
And that's what I did.
Posted by lore at 07:21 4 comments: 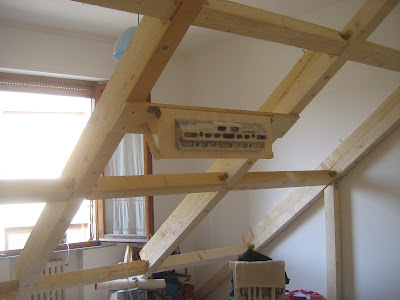 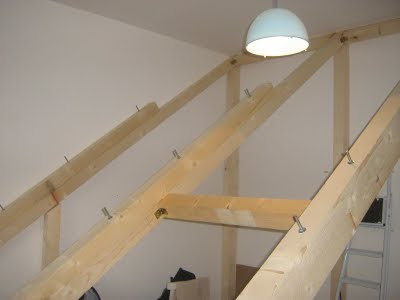 In the pics, the Beastmaker on again, the system monster and a phase of the building.
No, it's not the temperature, although it's still over 30°.
53 degrees is how much my board overhangs.
The very day of my last post, after pressing "publish", I went and bought the beams to build the frame, after nights and nights spent sleeplessly obsessed by the thought of the construction details.
The walls of the room cannot bear any weight, they are super thin. So I thought the best way was to take advantage of the little geometry I know and build the frame from the angle formed by the wall and the floor, and the angle formed by the opposite wall and the ceiling: the hypothenuse of a rectangle triangle. I measured the height and the length and found out the beams had to be 5 meters long. So, I thought, I go there, I buy them, then I stuff them in and I'm golden. Hmmm... how do I carry them? All right, I'll spend a few Euros more and I'll get them delivered to my door. Luckily, before doing this, I thought "How do I get them into the room?". A quick round of measuring showed it impossible. Panic. The dream was dead even before starting. So, thinking about all the money I will save from not paying the rent in Florence anymore, I decided to have someone build it. I sent a few emails, but when I got the answers, with prices going from 1.600 Euros up, I had already seen the light. I bought 2,5 meters long beams, with other 2,5 meters long beams to join them together via 10 mm bolts. And that's exactly what I did. After a few more sleepless nights and some long drives to and from Florence spent thinking about what I was going to need and so on, I couldn't resist the tension anymore and went for it.
When I got home with the beams, I drilled and joined together the first three, and I put them in place and they fit, I felt like a god.
In just three afternoons the frame was done, and then I went to buy the panels.
I drilled them, but sadly here, in this remote country abandoned by God and civilization, it's impossible to find T-nuts. After hours of driving around, I found a hardware shop which had... 33 T-nuts. I only needed 327 more. So I have to wait, I can't put the panels up until they are T-nutted. Naturally, I couldn't resist the desire again, so I thought "fuck it" and put two panels on nonetheless, one third of the all board. The rest of the frame is still open, so I will place the T-nuts from behind, without dismounting the panels. I know it will be a pain in the ass but I don't care. I have my 1/3 of board on.
Then I made some holds from small (they seemed big to be honest, when sitting on the chair) wooden beams, I made them as precise and smooth as I could; then I made footholds, from a 1 cm thick beam ("You can't slip off 1 cm footholds!" Unclesomebody once told me), I drew some lines on the panels and screwed everything in place, system like.
The result is a monster.
I just can't stay on.
To put together two moves in a row, I had to TOEHOOK the edge of the panel!!! As the video here clearly shows, there's room for improvement!!!
So, while I wait for the holds to arrive, I have my Beastmaker on again, and the hardest system wall I ever touched.
The future is here.
Posted by lore at 18:45 2 comments: