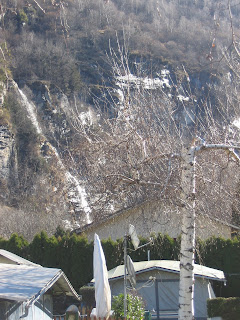 So today I've been on the road again, as if petrol was cheap.
Yesterday morning, my future boss made me go there for the much awaited job interview (I thought), so when he asked I said it was no problem. I woke up early, took the car (yes, THAT car) and drove there, fought traffic, found some coins under the seats to pay the parking, and prepared myself for the interview.
It all was: "you'll start november the 6th".
Cool, I thought, and thank you for employing me, but...couldn't you tell me that on the phone?
Anyway, it's hard finding a house for just a few months, and at decent costs.

As I was saying, today we were there again for a friend's degree at university, she's now a doctor. She took the whole bunch out for lunch, that started at a nice 3 pm, with fried pasta with cheese innit, then tagliolini with truffle, pappardelle with board ragu, and ravioli. Then some fiorentina steak, pork ribs, fried chicken and pig brain, fried veggies, spinaches. Red wine, coffee, grappa. No cake luckily. Thanks Sere.

I wanted to train but, guess why, I couldn't. I feel fat and weak, and I'm not far from being both.
Tuesday session was good, did the tests to set the starting point, and it was not depressing, but after all the news, that involve not going to Ticino in november, I decided to take this week easy, rest the wrist and finger, and start serious training next week. Defo want to train tomorrow, fingerboard or campus still don't know.
We have to see a house that's three minutes from the new built wall.

So, finally it seems something is going to settle down, even if for a short period. Main target of this period is: drive less and become strong strong strong.
Posted by lore at 22:58

I'm not surprised your wrists are in constant pain with all the fingerboard/campussing you do, Nibs. Man I never EVER campus.

Seriously, you really should get a powerball and strengthen that wrist. (Low revolutions = rehab mode)

unsurprisingly, i was thinking about that: at my parents' house i still have, i hope, a very old powerball. it's time to take it out!!!

to be honest, i injured my wrist by trying for an entire weekend the same problem, whose first move is pulling-pushing away from a gaston hold, so i really squeezed all the part of the wrist that is below the thumb. it's fine now.

sadly, campus and finger board are two essential training tools for me, since there are no walls in an 80 kms range from where i live, so to have a good volume of training i have to do at least two sessions at home and two on the wall, that mean petrol and time waste.

but next week this all will change.

Glad to hear of the new horizons. It sounds like you have everything in place to swim through the grades. I envy you! ;)