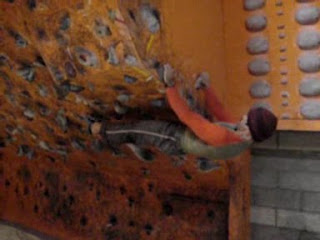 Sunday I wanted to rest. Needless to say, I received a phone call at 10 pm on saturday night from Luca, suggesting we both go to Amiata and the roof.
I resisted for almost 5 seconds before fixing for the next morning. Luca had his eyes on "Il primo dei moicani", the line I sent in january past year, and after a few unsuccessful tried he managed it. Screaming out of his mind he held the cut loose when you go far right, and then worked his way up. His base level is still very high, as he always complains about being over weight!!!
I had my eyes on the direct line, and didn't do it, but I managed all the single moves in the session (never happened before): just getting the crimp from the undercling without cutting loose saw my eyes open up in disbelief, so that I pulled on to continue the rest of the problem, but was so excited that completely missed the feet placements and jumped off.
I had previously tried the last move, a hard slap to the final jug, that goes up and left, so you're basically making a cross through dyno from the undercling pinch. Savage. I set my feet on and went: I didn't get the hold, I went over it ten centimeters. Success!!!
It was on. I started to think I could do it in the session, so I set myself for the KO hit. Well, I went down. The referee counted me up to eight, I managed to stand up again and complete the match with a draw: when I went for the first hard move, the dyno to the big edge from the left hand shitty pinch, I caught it, but my shoulder got really really strained and the acid taste of pain surged to my mouth. Game over for the day. Luckily I managed to execute all the other moves another couple of times, but at this moment my skin, unused to the sharp rock (and to rock in general, sadly), didn't want to cooperate.
A mixture of tiredness, satisfaction and rationality told me to stop, to take it easy and to rejoyce in the sun. It was sunny, it was warm, I was powerful from the morning (warmed up on "Arrostino's Wall" and got to the crimp three times in a row).
So finally I went to have a look at a new problem that Caminati had put up on the opposite face of the roof boulder, a slightly overhanging wall with some crimps and slopey dishes for two fingers. After a first temptative try, a bit scared by falling backwards with a heelhook behind a rock, I set to battle again and squeezed the shit out of those holds until I was on top. I think around 7a+ or 7b.
I really liked how I climbed that one, it's the way I always try to climb now: controlled, precise and definitive. Don't try to execute the move: crush the move. Don't just get the hold how you can and then adjust: lock off until your biceps are so tight that they modify the gravity of the area, and destroy the hold. I'm not good at climbing dynamically, because I feel I lack precision in the movement, so until I work this out (if I care) I'll keep climbing as precisely and powerfully as I can.
It's been a gorgeous sunday, not only for the feats in themselves, but also because they happened while I have seven fucking weeks of training on my body and this is something to reflect about. It's been gorgeous also because I managed to climb hard while being relaxed, because my shoulder is recovering even if I bash it, because Luca sent his project and because we climbed in the full baking sun of southern Tuscany.
I hope all of you have had a similar Sunday.
Posted by lore at 13:51

Glad to see you are warming up on such a classic in Arrostino's ^^. I am suprised Luca hasn't crushed it and said 7a like I fear it may be ;)

It is good to see your training translating to making new ground on your project and I am sure it will go down soon for sure.

sleep well rich, the grade has been confirmed also by michele caminati!