THE GREAT SHARK AND THE HUNT

Strange few days the last ones. I'm very very busy teaching: mornings at the school, afternoons private classes. It seems like work is packing up very quickly, and it's a very good thing, given that probably in a few weeks foreign students will start to abandon the city, to go back to their native lands, where the girls are fully dressed for the coming winter (it's still 22° here during the day) and the wine isn't neither cheap nor good.
In the last two weeks I was teaching to a class of girls at the first level, chasing with them the other class of the first level which had started two weeks earlier, in order to make them good enough to join the other class. Well, our chase will end with this week, and from the next week, as I have been told by the Director today, I will take the new formed class. This obviously means that the teacher of the other class will lose her class. I don't feel very comfortable in this role of predator, and as I saw her going down the stairs of the building, I couldn't help but stop her and tell her that I was sorry for having caused this chaos with my appearence at the school. Luckily she knows how things go in these cases, we both know that this time is my time, next one will be hers, and everything is fine, but still I feel like an animal at the top of the food chain.
Then, I am a bit tired lately. Sure work plays a big part in this, but it also gives me alot of psyche for doing things, so it's all good. I'm just tired from climbing and training. I am very happy about my recent choice of putting in alot of volume in the gym, because this enabled me to have more juice when on rock, and last sunday proved this again. A 13 moves long traverse on slopey and humid holds, after a nasty two moves sitter, really took alot from me, and nonetheless it went down, leaving me still able to flash a nearby three moves 7a+ and to fall twice on a 6a!!!
Yesterday night, despite high spirits, I wasn't really on: my right ring finger is giving me some trouble, I think I slightly compressed a tendon in a slap on a woody volume, and it's been hurting for the last couple of weeks. I bouldered with my tall friends with a penchant for fully stretched out moves, and I got something done, so it's good. I still forced myself to almost no rests between attempts, so I was rapidly going down but after the good rests I was very on.
This all leads me to thinking that now more than ever it's time to hit the rock. Sadly I don't have much time, because I probably have to work this weekend, but the desire to go hunting is very very high, and I am confident I can follow it where it leads me. I want to get back on my project up in the Dolomites before it gets covered by two meters of snow and people start skiing on it. 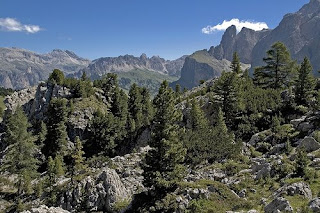