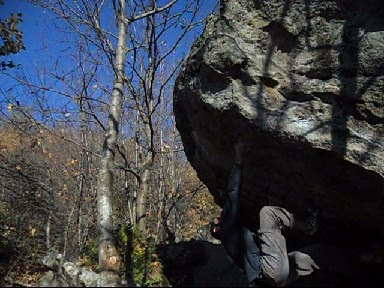 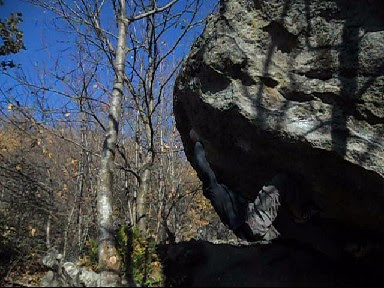 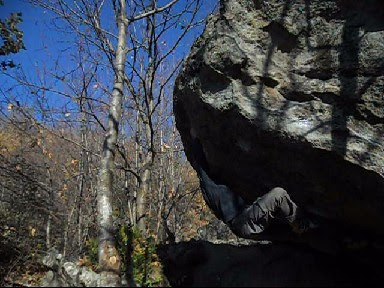 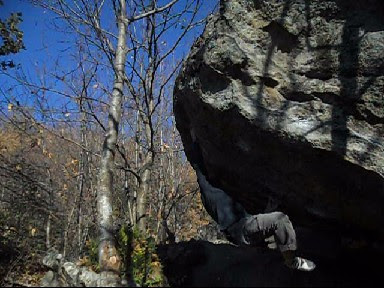 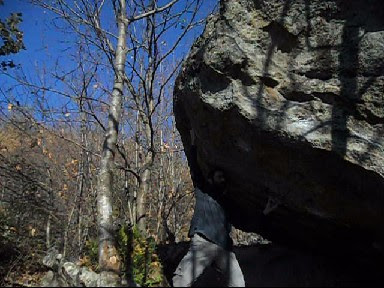 In the pics, the original sequence from another point of view, a point you can read about below.

Two days, that's how long the new final sequence for my project lasted.
Yesterday I realized I cannot and I don't really want to use it, and for many reasons I want to stick to the old sequence, the original and the only one.
First of all, the original sequence is the original, and that's enough.
Second, I have climbed the original problem using the original sequence at least 20 times.
Third, I have climbed the project with the original sequence twice already, without managing to top it out.
More precisely, I cannot use the new sequence, because I rationally put myself into finding it, to cut off a low percentage move. Well, that's finding a shortcut; in reality not, because as I've said the new sequence added a move and was really more physical, but it was also, for me, a lot more steady (although I never got the chance to try how that last deep lock would feel, coming from the start); so, being more physical and more steady for me, it's also easier. And that's not fair.
Moreover, the first line to be climbed on that roof, was a problem I put up to start practicing the direct line: it featured its first hard moves, then abruptedly cut right to big holds and the top, in a sequence whose final move was the same of my new sequence of the project.
So, that is really dirty. If I go right at the top, why not going right lower? How could I justify, to a climber who attempts the problem in the future, that he or she cannot go right low, but only at the top? How could I explain that he or she cannot get the jug because it's out? How could I tell him or her that it's unfair to directly dyno to the good pinch skipping the nasty crimp?
You see, what a mess from a simple move.
Then, most importantly, what about myself? The new sequence, having already succeeded with the original one, is for sure a step back, both in terms of climbing ability and mental strength. If something feels easier, in a situation like this one, it equals cheating. It's not like using all the holds while others skip them, it's using holds that neither I, have never used. If I climb the problem with the new sequence, there could be only two possibilities: I never try it again, never fully appreciating how the original one would feel after topping it out, and having doubts forever about my ascent and never getting the chance to get better; or I keep trying it to repeat it with the old sequence. Both are useless.
The first one for the above reasons, the second one because it's just pointless.
So, in the brief space of two days I changed again my mind. I wonder if, last Sunday, when I was so weak, it was also because I had been searching that shortcut; I had cheated; I had admitted defeat. I'll never know.
What I know, is that one of my resolutions for this year was, and still is, to be pure. Especially to myself, which is my most severe judge.
So tomorrow I will go there, and again I will try to destroy that motherfucker that is ruining my life. If I can't, I'll pull out of my bag my weight vest, I'll wear it, and I will start lapping the motherfucker with 2 kg on, as a start. Then I will go on, and on, and on, until I'll feel satisfied.
When will I be satisfied? I don't know, but crushing the project in fine style without breaking a sweat could bring me some kind of joy, I reckon.
Chalking up before the final move, could.
Getting the jug so easily that Velasquez could have portrayed me in the meanwhile, could.
You got the idea, I'm sure.
Many years ago, when I was 14, one night I went with some friends to steal bengal lights from the train depot, to use them the following day at a football match. And I never liked football!!! We had to cut the barb wire, to crawl under the lights, and all that stuff. We nearly got caught. I wonder why I put myself in that situation.
I wonder why I put myself in this situation: this problem plays to all my weaknesses. It's long, 15 moves; the hard part is the last 4 moves; the hard moves are dynamic, something I'm very bad at, and reachy. Plus, it has small, painful holds, mostly pinches, a prehension I have never ever trained until recently. The enemies we choose qualify us more than our friends. Enemies are chosen by hate, friends by love, and hate is always more pure and more sincere than love. I wish I hadn't seen that line. Or do I?
But now it's too late. I'm stuck in it. I've done all the hard part, I only have to bear the pain and top it out, then I'll go home and I'll watch my face in the mirror for a long time. And what I'll see will be the true me.
Keep the fucking faith, love and destroy.
Posted by lore at 15:47