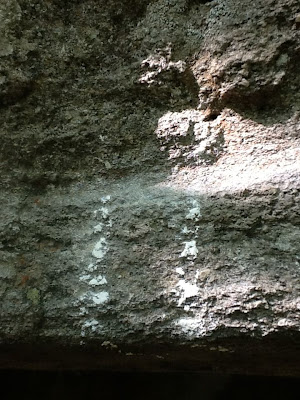 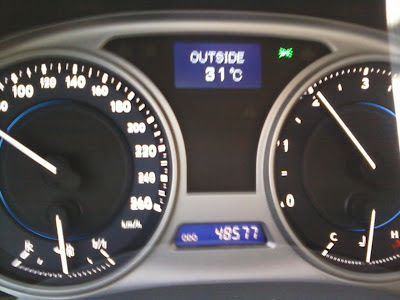 In the images, a pretty small hold and a pretty big number.

When you read those numbers while driving to the boulders, many doubts surface, and you try to rationalize, to look for pros and cons.
You're going to try and climb a project, that you could not do in better conditions one week ago, when you also had the added benefit of a spotter to make you feel safer on a couple of tricky moves.
You also woke up at six in the morning, you drove one hour to school, you taught your classes for six straight hours, then you drove two hours to the boulders. At the end of the day the kilometers will add up to exactly 298.
Is it worth? No.
Wouldn't it be better to go home, have some rest, some tea and cookies and then put in a good board session? Yes.
So why going?
Obviously, because I want. Because it's the wrong thing to do, and because it's a mental task. Because I want to rejoice in a completely useless task.
And moreover, because I want to climb my project.
The French philosopher Blaise Pascal, used to say that one must not approach faith in a rational way. In his opinion, faith was not exactly a gift, it could be also a conquest: he said that in order to become faithful, one must act like a faithful person in every moment of life, and this behaviour "vous abetira", "will make you like beasts".
Pascal wasn't meaning the beastly ability to crush small holds to atoms, he meant that by the mindless repetition one can achieve something that by the reason he can not. It's like turning into robots.
I am neither a Christian nor a believer, but I have faith. I have faith in myself, for example, and in few others. But mainly in myself. And I want to act like a beast, without thinking and rationalizing: it's boiling, the project is hard, I'll drive three hours, I am on my own. Fuck all, I'm going.
If I get on the car, if I drive, if I get there and if I do my best, without thinking, it could also be that somehow I find myself on the final holds.
Sometimes things just happen. We have the responsibility of being there right when they happen.
This is a strange spring I'm living: full of highs and lows, full of emotions.
So my friends, keep the fucking faith, and find the fucking faith in behaving as beasts do.