WARNING: this entry is long. The short version is: I found out some of my old problems are hard; I found a new connection under The Roof (my own private Parisella's) and I started training again. On the other hand if you feel confident enough to challenge my writing obsession, prepare yourself a big cup of tea, take a big bag of cookies and dive in my mind. Thank you anyway.

One of the (many, I know, and I'm a bit sorry for that) things that I complain about on this blog, is the lack of reference in terms of the difficulty of what I try or climb. This is the problem of climbing on one's own and opening new problems in areas that are seldom visited. Everyone has experienced this, I'm sure, even the big names. There's a line from this video that keeps resounding in my mind: just because something feels hard, it doesn't mean it is hard. Blimey, if James says so, I'd better believe it.
So, I drive a couple of hours, I brush a problem, I struggle on it, then after x tries or days of effort I do it, and I am clueless. I mean, I can probably tell if it's in the 6th grade or in the 7th, but not much more.
So, when my problems get some attention, I'm always glad and afraid at the same time: glad because it's like being a proud father when something yours is appreciated, and scared because if something is easy and felt hard that's not good. The much feared downgrading is always behind the corner, and sometimes it's used to establish a hierarcy between the persons, not between bits of rock. I already blogged about this here.
These past two weekends, the Amiata blocs have seen the appearence of a strong team of pullers, tearing the problems apart. I am very glad because my lines are appealing, as it seems by the number of repetitions they get, and because what felt hard is not really easy.
The problems I've put up in the various sectors in the last two years are in the Font 7b/7c+ range and that's not bad after all.
One other thing that is sometimes hard to accept is being crap at finding beta. I never seem to be able to pick the easy sequence, and this clearly makes a chaos. But when a problem gets five repeats and none with your sequence, you're an idiot, but a proud one. The battle is my battle against myself: there's no one else in it. It's an endless battle, I cannot win and I cannot lose unless I give up: a thing that I just don't do. The battle in itself is the aim.
Finally, I have to take some serious rest. My sciatic nerve is still causing problems, my calf is painful and my thigh and heel are still a bit numb: not good. I have climbed a lot on this injury, and despite being happy about it, I clearly asked too much from my body. I need to recover before starting the summer training. This is being postponed because I kept climbing, but I also kept spending far too much time in my car, driving. In some of the past weeks I have been to Amiata three or four times a week, and each time means almost 300 km of Tuscan roads. It's tiring and very costly also. I can't do it anymore, I have to select few, good climbing days: just like past Sunday with my visiting friends. I climbed for a full day (a rarity nowadays!!!) repeating many problems, included some harder ones.
The amount of energy I can obtain for a group of nice, happy and psyched friends is enormous. It's incredible.
I have to thank my friends for this: they came and they appreciated my problems, even if short, lowball, or eliminates. One of my closest friends commented that one problem was "a new world", and he defined me "a purist with a British vision"!!!
So, I can look back at things I have done years ago with new eyes: our past is not a prison of things set in stone; it can be understood under new perspectives; it can be interpretated and reshaped. It cannot be cancelled of course, but we can learn and we can get rid of the bad bits of it.

Then: after one week off and a period generally focused on climbing with no structured training in it, I am back to the program. I have a short term goal and a long term one. Plus another one in the middle.
I need to build up some serious power endurance, to climb my two projects, that are in the 15/20 moves range. I have another project, a short one of just 5/6 moves, but I think that it will benefit from this kind of training, because there's a good amount of pure power training in, as you ma see if you analyze closely the picture. 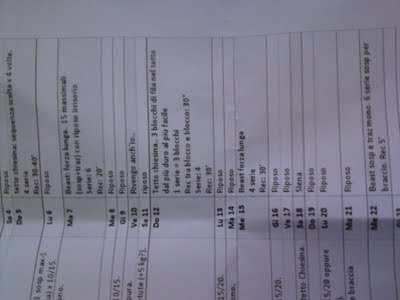 So yesterday I found myself under the roof again, this time to do laps on the easier lines. I took the chance to refine my sequence for the project, finding a way to avoid the cut loose and subsequent swing out left once gotten to the jug that marks the start of the hard bit. Promising.
Anyway yesterday I had the worst conditions I've ever found there in 10 years: it was literally suffocating. The previous days' rain had completely saturated the air and the total lack of an ventilation forced me to go down the final step of madness, taping my battery powered fan to the roof to cool down a crucial pinch, as the picture shows. It worked. Madness pays off. 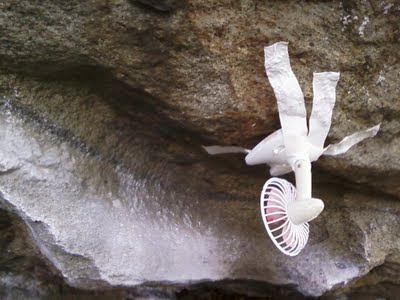 Anyway it was a hard session: I started sweating from the first lap and didn't stop even during the long rests. I had to do 4 laps of a chosen line, for 4 sets. I decided to try the 7b+/c sequence that Keith put up years ago, but then found something new: I found out it's possible to connect the new project's start with all the hard part of the 7c!!! YES COME ON ANOTHER LITTLE PROJECT!!! It's something around 7c/+ into 7b+/c. I have no idea of what it translates into, but it's cool and hard. Paranoically I thought I was going to do it first go, but I was so far from the mark!!! Just the project's start felt very hard and I could not climb the new line, but I decided to use this new problem as the first lap of the 4. Wow, what an error!!! It's too hard for even one go, and this left me very tired for the following three goes on the 7c. Obviously I could not complete any of these goes, but I stepped back on immediately after falling and kept going to the top.
A 30 minutes rest passed in a breathe and I had to go again. This time I nearly completed the new line, only to slide off from the crucial heel placement (having my heel still a bit numb from the sciatica didn't help): it's hard, I reckon 7c+/8a. Whatever.
This second set passed again and it felt better, despite my aching skin (Antihydral next time!!!) and my forearms the size of a Zeppelin. Again I did not complete any of the goes in a oner but I think that's exactly the point here: going beyond complete failure and fatigue.
Another 35 minutes, another cup of coffee, supplements, and heavy heavy breathing. A rain storm was loudly approaching.
This time I decided to stick to the chosen problem from the first go, without trying the new project and it paid off: despite being at the 9th go I crushed it, then I almost did it again on the following go, but didn't managed to get to the top of the problem on my third go. It was clearly time to go home!!!
What did I learn from this session? Firstly that I enjoy so much this shit that I probably am REALLY nuts; secondly that for my projects four goes on this line are too much. The problem I used is 12 moves long; 4 laps make 48 moves, more than twice my projects; I know that now I rest when I jump off the top of the problem and I crawl back under the roof to start again, but I am afraid that it's too much volume that hinders the power aspect in the hard moves of the 2nd, 3rd and 4th go; moreover, I was totally empty after the 3rd of the 4 originally planned sets. So, from next session I will do three laps for four sets: that will pack up still 36 moves, with hopefully still a high emphasis on power. A quick talk with The Guru tomorrow will be necessary.
So this is it. On a final note: I found a nightmare on the road back, a hell of a storm, to which this small video doesn't do justice.

Well, if you've made it to this point, without throwing the pc out of the window or cursing the author, give yourself a pat on the back, accept my thanks and gratitute and enjoy the rest of your life until the next time I'll steal your time from it.
Posted by lore at 12:40