YOU REAP WHAT YOU SOW 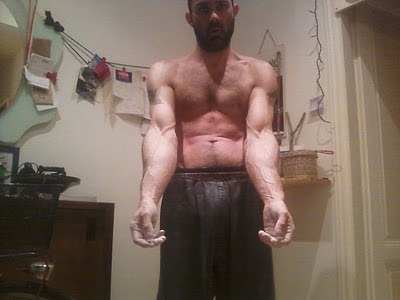 In the pic, my forearms crying for help and oxygen. I don't look happy, do I?
This project is going to drive me mad, and to make me sweat blood.
I don't know why, but it seems like I'm unable to avoid getting into troubles. Years ago, after doing the deed with "Out of Service", with the effort it required, I had nothing better to do than adding a sit start to it. Weeks and weeks of toil, tears and frustration, with the final happy ending at last.
On established problems, I always want to add more moves or climb harder variations: it's happened many times, and it keeps happening. Not every time it's as smooth and straightforward as when I did the "Roof Direct" with the original lower start.
That very same day, january the 3rd, I conceived my actual nightmare.
It's been a strange session, my last one, on that thing. 5th session, and I finally climbed the extension start in one bit. In the morning, despite not feeling very sparky, I thought that now it's time to pull the finger out, and to seriously embark in trying to climb it, rather than trying to try it. So from now on, every go will be a redpoint go. I have to suss out a few question marks, that may sound trivial, but to me they are not: first one, given the current state of my climbing shoes, I have to figure out which model will do the job best. Solutions have a better heel, but they are less sensitive and precise on the toes than Jet7's, whose toes, now, are pretty worn out and a bit rounded out. The Wild Climb have taken me on top of the "old" problem already, so maybe it's another option. Then, on the micro-beta subject, I still have to decide one last crucial foot placement for the final, precarious and tricky move, the dyno to the jug. Before doing this, I want to try another different sequence, going to the jug left hand, not right hand, and see what it feels like. I don't know which one will feel harder, after 15 moves in a roof: a low percentage dyno or a powerful lock off?
And so here we are to the main issue: am I crazy to get me into a 15+ moves marathon? I've been there before, with "OOS Sit Start", but the hardest move of that problem is the average move on this one...
To solve this problem, I have gotten into some PE training, going to the gym and alternating power sessions and PE sessions. In these ones, I do laps on problems, climbing down to the starting holds and then starting again; or trying to repeat harder problems at the end of the session. It's horrible and it makes me want to puke. On power sessions, I redpoint the hardest problems, or I repeat others with my weightvest on, with 4 kilos.
Yesterday I did something new on the Beast: instead of the usual deadhanging session, I did 1 minute hangs on the 20° and on the big rungs, like this: 20 seconds hang, 5 pull ups, 20 seconds hang, 5 pull ups, for a total of 60 seconds. 4 sets on the 20°, 2 on the rungs, I nearly puked.
So, here I am.
Last saturday I climbed the easy part of the project, only to find myself at the start of the real difficulties with numb fingers, unable to keep going. It's been frustrating. I was going to go for it but simply couldn't, and it hurt me. It took forever to warm my fingers up again, and afterwards they were in pain for an hour. Another go saw me again getting the "starting" jug, but I came off the left toe hook and it was over.
I think higher temps could do the job here, as Martin says about his project.
I don't know why I couldn't feel really and deeply happy about this progress: from not doing the section to doing it twice in a session; something in my mind was not in the right mindset. Maybe wrong expectations or simply being not 100% in it, or maybe simply being disappointed for not playing the day professionally enough: I climbed too much before going to the roof, but I was with friends and that's what I felt I wanted to do, so I did it.
I ended the day repeating a few 7b's, so after all another "big volume" day for my standards.
It's on, it's really on.
It's time and I am a fool.

-checking all the possible betas cause what you can climb from 5moves in easy you may not climb with 15moves in front anymore - clever!

-building up resistance; have you ever tried to build up resistance on the actual project?! work the problem from top-down NOT down to top. eg, climb it every try from one move further down. like that you will learn the ending perfectly, and you will be able to climb the ending also when you are tired!

- cold fingers suck! i have the "coldfingers" problem sometimes even in summer. i learned that i have to (very easy) run/walk arround for 5-10minutes (with downjacket) to get my body-system started till i get really WARM (even start transpire). then i just quickly cool down my tips on a rock or with a bit of liquid chalck on tips (if needed cause of small holds, and/or friction). like that i am able to climb up to 20 (hard) moves at 4C - but depending on the type of holds it also needs to be 10C)

- search (desperatly) "restpoints" where you can (quickly) shake out your hand to get some blod and feeling back.

-if its just too cold, work sequences from top down to get resistance

dont put pressure on you, next year that rock will be there as well. i woud be a shame to run so fast through it. enjoy the PROCESS. no hurry! and dont forget to have FUN while climbing - even though some screaming and bad words help too from time to time ;)

thanks Martin, really.
your tips are very useful, especially because this time I embarked into something very very challenging, so your experience is priceless!!!
on previous projects, I had the required level, more or less, from the start of the process, and at some point things just clicked and I climbed them.
now it's very different. I need to really build my new level around the climb, because to me it's still so hard!!!
thank you really for finding the time to contribute here, I really appreciate it!!!!
DESTROY.