YOU GOTTA FIGHT FOR YOUR RIGHT TO PARTY

In the pics here, a few moves from the extension. I think they show how physical it gets: long moves, body tension, perfect problem. 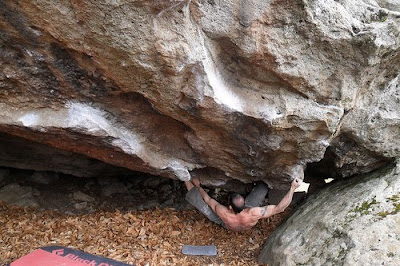 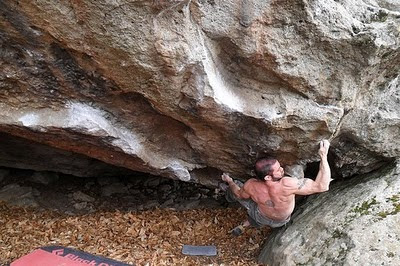 On another note, you gotta fight for your right to climb.
I know people who can dedicate all the time they want to climbing. Sincerely, I don't envy them. I've never been able to do so, I have always had to struggle to fit my climbing into my life: it could be university (not that much but still...), it could be partying (a fucking lot of it...), it could be girls (never enough of that...), the fact is that I have always fought for my climbing.
This is very good, and I'll tell you why: because it strengthens your will, not only your muscles, and with a stronger will you also climb harder problems, because the struggle is just the same. The other day, speaking with a good friend, he said he wouldn't drive 4 hours to go to Ticino for the weekend, it's too long a drive for just two climbing days. Result: missed opportunities to climb. You don't move unless you have longer vacations, and that happens more seldom than every weekend.
Some people I know would not even drive one hour on their own to go to the crag. That's unreal for me. I don't care, I just want to do the business.
Moreover, struggling to get some climbing, prepares you to... struggle to get some climbing. If you can't dedicate anymore all your time to climbing, as soon as the first difficulties will appear, you won't be prepared. I've seen this happen so many times: you are unable to fit small bits of climbing into your schedule, you are unable to train while short on time, or tired, you get basically lazy, because everything gets... harder.
Well, I like when things get harder. Harder, mind, not impossible. Hard is good. When I do a problem, if it's not a project, I want to do it as hard as I can: if I use it for training, I want the hardest beta I can manage. But back on topic.
It's all to easy to get to the crag when you've trained for 4 months without a single other concern in your life, when you have eaten well, slept a lot, and you don't have issues moving around and making noise in your head, like the rent, the bills, the girl, the stuff that makes our lives what they are.
The trick is learning to do the deed when poorly rested because of work, or after an argument or a bad day. Why is this so important? Because it broadens the chances to get some climbing, obviously.
This doesn't mean that I couldn't do with a full time climbing life: of fucking yes I could. Simply, I don't want to get soft. I want to get old and still be cranking. I don't want to stop climbing at the first difficulties, I don't want to become another Stuart Cameron. I don't blame him and I don't judge him, nor all the others that simply decide to quit, to "knock it on the head" as he puts in an old interview. Simply, I don't want to do it.
Why? Because I love climbing.
Because after a climbing day in which I have given my best, regardless of success or failure, I feel complete and fullfilled for at least a minute, before diving into the struggle again.
But that minute is worth a thousand years.