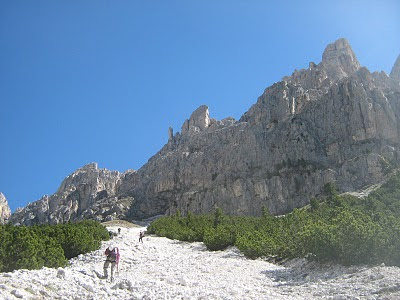 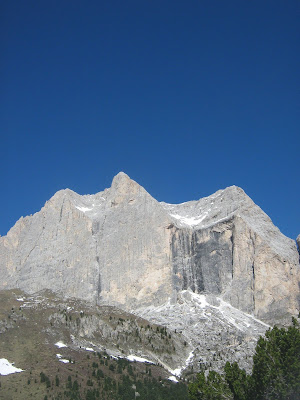 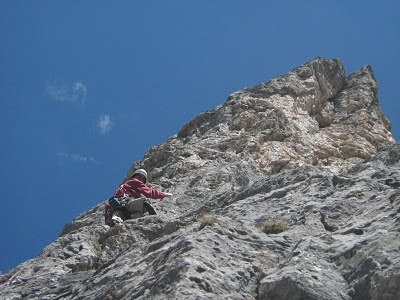 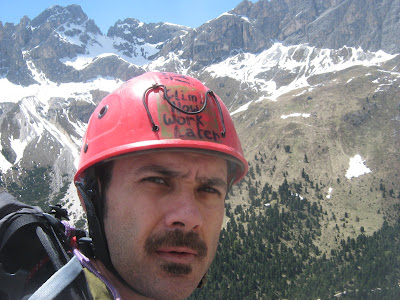 Yours truly at the top.
I spent the weekend in the Dolomites, and as usual it's been gorgeous. With a nice group of friends, also. With my friend Andrea I climbed the "Spigolo Maestro" VI, at the Catinaccio group, a nice short multipitch (six pitches), very exposed (it's a ridge) and both physical on the overhanging bits and technical, on grey wonderful slabs, where you always find the hold you need to progress right when you need it. Well protected on pitons, I only put one friend, before realizing I hadn't noticed a nearby piton. I am very proud of having led the crux pitch. I had a moment of tension when a fast party, led by an alpine guide, as we found out later, joined us at the third pitch belay: I was leading the delicate slab above, and I started hearing some muttering from below, clearly the fast party was complaining about us being slow. In fact, Andrea later told me, the guy got to the belay where he was, and quickly said "Oh, shit we have to wait now!"; Andrea, my very best friend, quickly answered: "Exactly, you should have gotten up earlier, as we did." End of story. Silence again, and I completed the pitch in glory.
I spent the following day all alone at Città dei Sassi, getting back in touch with bouldering. I tried "Dolomitenmann" 8a+, a left to right traverse out from "Mecca" 7c. I had pictures of James trying it last november, almost doing it in a few tries: well, came out that his sequence skipped at least three good holds and was plain brutal. I spent a long time finding my own sequence and managed to do all the moves quickly, but I hadn't enough in my tank to complete the whole long problem (20ish moves). I did it in two halves and in the doing also repeated "Mecca"; sadly, baby soft skin, temps in the high 20° and general lack of climbing fitness all together were too powerful enemies for me to defeat.
I had moments of rage and disappointment, but then realized I was in an amazing place, doing what I love, and my elbow was also feeling quite good. I kept on climbing on the problem until I couldn't do more than one move in a row, then with a monster grin of satisfaction, packed and left.
As the last mountains disappeared in the rearviewmirror, and I had only flatlands in front of me, I started reliving all the moments of these two days, and suddenly I found myself there in the mountains again, with the rough grey and orange rock under my fingers. And this is just magic.
Posted by lore at 14:45