The rule of the part time blogger is that after a hiatus, one should immediately renew the enthusiasm of the followers, by announcing exciting news, a strong resolution, or a mega project finally hammered into submission.
Not in this case.
I have nothing special to tell, but I want to start again with some good habits that I had to put to one side in the last months. I spent the entire Summer working and studying, and now I am finally free.
Belive it or not, I climbed a new problem in May, in the only couple of hours that I've spent on rock in ages.
This problem is cool, it's always been there, at one of the most frequented areas around, and it was never cleaned. The most essential line of crimps on the lip of a roof, for the most elementary of all traverses. Not.
While the holds were all there, in their glorious and different forms, from majestic, grainy slopiness to pointy teeth, or plain razor blades, the sequence was far from trivial.
With a brainless enthusiasm I got to work and after five minutes my skin was already thrashed, but I had a sequence. Torrid temps were suggesting to let it rest for a few months, but that would have been too easy.
I don't know how I managed, but I climbed it. Pulling as hard as I possibly could, surely must have helped. 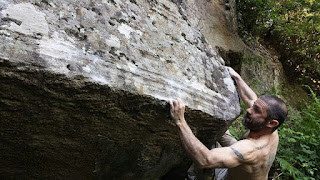 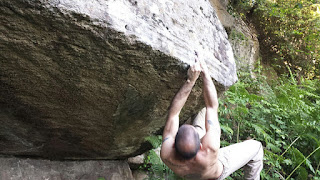 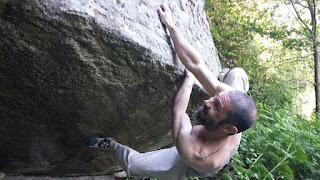 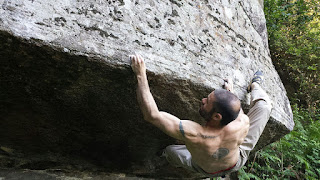 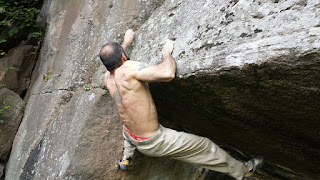 I called the problem "Animali Senza Tempo", which means "Timeless Animals", and it's a reference to sharks, crocodiles, and few other beasts that are almost exactly the same as they were at the beginning of evolution.
In a few years time, this problem will be "discovered" by someone who is sure to be the first boulderer to set his or her eyes on this line - because he or she is sure that bouldering didn't even existed here before their arrival -, it will be "freed" with all the possible cheating techniques, brushing holds out of the soft rock, eliminating spikes and blades, not sticking to the lip, all in the name of climbing progress, all in the name of shameless self promotion.
These ridiculous individuals have all my pity, compassion and sympathy. Only, I have no pity, no compassion, no sympathy at all.
I wonder how one could possibly believe that nothing existed before them. I wonder why people aren't interested in knowing the facts, the history. They revel and bask in ignorance, in name dropping, in being servants of the local starlet, in shining of reflected light.
People are uninformed, they love to be uninformed, so that they can believe what they like to believe without having to stick to facts, but then when they make public statements, being uninformed, they misinform others.
I could go on forever on this. I won't.
But you could ask why I don't face this issue, why I don't face these people and thell them how things really are: that they haven't invented anything, exactly as I didn't; that problems X, Y and Z were climbed ten years ago; that they cheat on routes and boulders.
Well, there are many reasons.
First of all, I don't care that much at all. Knowing the truth, what is false doesn't affect me.
Second, they don't deserve the truth. To quote Jack Nicholson in "A Few Good Men", they can't handle the truth. Truth is not for everyone, not for those who want to be the first ones, the unique ones, the rebel ones, the pure ones. Truth is democratic: there's always someone else who's been there before, done that before. We only need to widen our views.
Third, I don't want to cause a stir, and if I speak, there will be much more of a stir, there will be a Maelstrom that will suck them all.
Finally, being a bastard, I take great pleasure in seeing how they all make fools of themselves in front of my eyes, and in front of the eyes of those who have been around for a while.
It's fun, I started this post wanting just to reacquaint myself, just to post a couple of pics, and look what I've done.
But I left the most amazing news last, the most incredible of all news: I want to rock climb, I'm going rock climbing tomorrow.
Now tell me if this isn't really unbelievable. It is.

real rock to climb on??? be careful my friend, real rock fights back ;)

Hey Martin!
Never mind my friend, after one afternoon spent in the same area as always, repeating the same problems as always, I have already a renewed love for my board!!! Swiss is close though! :-)