I had thought that my moment of top form was going to vanish, and I had thought that I was going to run out of projects. I was wrong on both.
The two days of the last post became more days, in which I found myself miraculously glued to ze rock, sticking move after move.
I found myself stronger, also, adding kilos to all my previous personal bests and that's the only thing that counts, to be honest.
I ask myself why now and not before.
The answer is that it's happening now because now I am an overally better person than before. And I am a better person because I am a more complete person: my mind is as fast as a speeding bullet and as sharp as a laser beam. It's not hazy and lazy, incapable of thinking to anything that's not grades and moves. OK, it's never really been that lazy, but you get what I mean.
Better mind, better body. I'm free. Free from others, but mostly free from myself and from my demons and ego.
I know what I am and I know what I can do.
The thing that strikes me most, to be honest, is that I became less shit at flashing problems. It all started in December 2014, and I suspended my judgement waiting for some more info. Then it happened again, but on first ascents, so again I suspended my judgement. But it happened again and again. So, finally, I must think that somehow I became better at flashing problems.
I spent this last weekend in one of the places that I love the most, and in which I feel more at home: the Dolomites.
Steep boulders on pockets and edges made for testosterone bouldering with bulging muscles and veins, fuelled by all sorts of natural and artificial food, from buckets of hyperproteic yogurt with honey and hazelnuts, to protein shakes, to honey and peanut butter sandwiches, to hamburgers and pasta.
I flashed basically everything, including two 7c's (one was a retroflash of a problem I climbed ages ago). I was also very close to doing an 8a that I smartly tried at the end of the second day. Punter.
OK, OK, I know what you purists are going to say about bouldering on dolomia: it's choss, they're eliminates, it's nasty, etc. I could finely discuss our diverging opinions about this subject, using my rhetoric to convince you about the quality of the bouldering there, but I won't do it. If you don't like it, you don't deserve it. Which is better for me also, because I like my boulders quite and private. 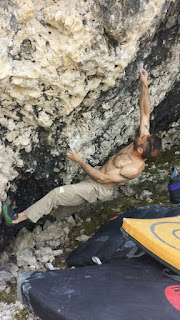 Unfortunately, this moment of splendid form coincided with a certain Chzech climber flashing 8b and 8b+ and climbing 8c in a day, so I am not surprised that neither LaSportiva nor Black Diamond called me to ask me if I'd like to be paid by them to just keep climbing and being so awesome.
Posted by lore at 12:59