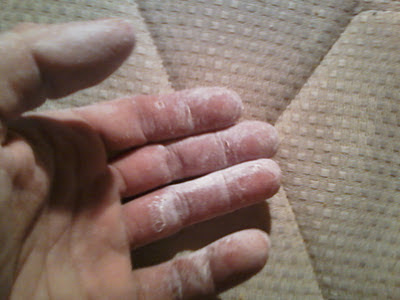 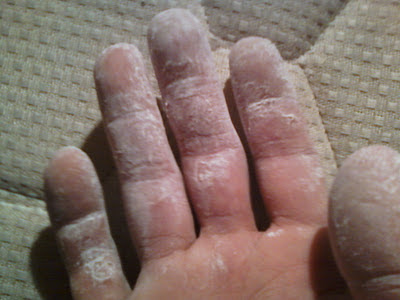 I really really like to train in the morning. That's something that I'd never thought possible.
As the pics show, skin is a little bit of an issue as of late, that caused me some hard times on rock, but nothing special.
This should have been my second week of complete rest, but I didn't even do the first one. I did a session on the board yesterday, finally managing, on my 7th session on it, to climb my project IN TWO HALVES. Success is closer. I hope it's hard, because it's giving me a hell of a time.
I did a couple of easy morning sessions on the Beast, getting back into it as gently as possible, still trying to keep my right ring finger quiet: I found out that it's safer to push it on the fingerboard than on the wall, on which you can't control how you'll catch a hold on a hard move, and that's dangerous.
The overall feeling is OK, and I managed to set a personal best on the back2 pockets, with some nice 32 seconds.
Beastmaker and home board. Is it the formula for greatness?
Posted by lore at 11:37