This climbing day at Amiata top has been under the sing of changement. First of all, all of a sudden during the night the weather turned baltic. Today it was around 14°, friday it was 39° in the fucking shade. Modern thermometers aren't powerful enough to measure Florence temps in the sun, that's why they always put them in the shade. It's been so good to boulder with a nice fresh breeze, I had taken my UKB hoodie out for the first time, and even if I took my girlfriend's one instead of mine, it's been excellent to climb in it. I hope that the psyche I transmitted to the hoodie will push my girl back into some bouldering.
Before going to the top, I wanted to do one problem that I had seen a few weeks ago in another area in the valley. It's a small face, with a good arete and a crimp and nothing more. It's very small, but the last time I tried in vain to do the sitter as I wanted, having to be content with the stand up start, from the crimp and the arete, a heelhook, a slap and a rockover. I judged it 7a. The sitter looked impossible. Then today I got there, I cleaned the leaves a bit better and hey! a new excellent foothold materialized from nowhere. This made the sitter super doable, and in fact I did it second go, judging it... 6c. I named it "Mutation", because either the rock created a new foothold in the last month, or I turned into a strong mofo. I think the first option is correct.
The topout isn't difficult, but it's a bit scrambly, it's dirty with moss and leaves and for a second I thought I was in a dangerous situation, also because the landing, although very close, hosts some rocks and pieces of fallen trees. In that moment, the image of Jerry soloing in Wales the day after completing Master's Wall, came to mind, just as I watched left, I chose a spot for my left foot and securely topped out. I may say I've bouldered with Jerry today, so much I've thought about him. Legend.
So with this quick success under my belt I proceeded towards Amiata top, where I immediately got to grips with my roof project. Blimey it's hard. I can do the first move, a long reach from a good undercling to a small crimp with bad feet. Then I can do the third move, a dyno from a bulge for the right hand to a good hold and the top. But the second move, to bring the right hand from the undercling to the bulge on the lip of the roof is absolutely nails. There could be another sequence, using the undercling left hand and dynoing right hand directly to the bulge, it's at my physical limit in terms of reach, dammit, otherwise it would have been almost perfect. I spent alot of time under that small roof, trying hard, but to no avail. It's very very hard, I think it's hard even for a tall guy with the dyno sequence, feet are terrible. I'll go back, but I definitely improved. At some point I realized I might have eaten not enough, because I started feeling a bit dizzy. Once my body started eating itself to get some calories, everything got fine again.
On my infamous bad bad day, two or three weeks ago, I had tried to do a traverse that ends in another established problem, a nasty sitstart to an arete (again). I couldn't do it that day, and I couldn't do it today, but today I was damn close, but had absolutely nothing left after trying too many sequences to gain the crimpy three finger pocket with the left hand as it's necessary to do. Next time I'll do it and I will name it "Fame di stelle" (Hunger for stars), a quote from a novel by Antoine de Saint-Exupery.
So that's it, my weekly day out has gone, I am a bit sad because I wanted to stay but couldn't. Can't wait to be back out bouldering.
Here are two pics from past year, showing the higher moves of "Mai dire male" which is the arete joined by "Fame di stelle" traverse. 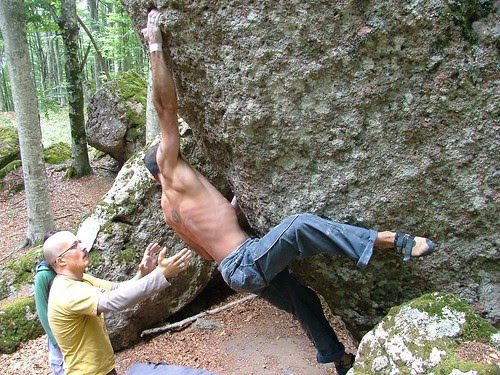 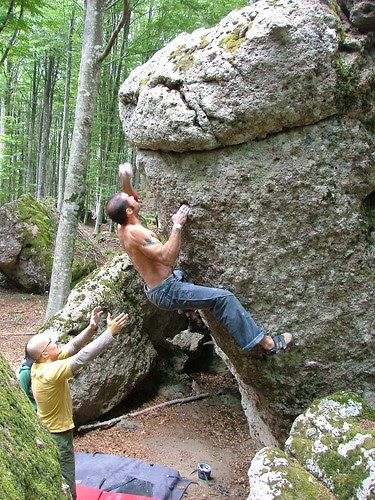