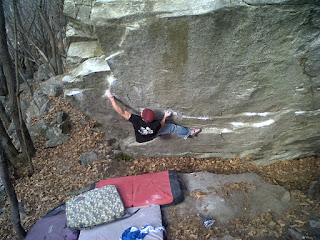 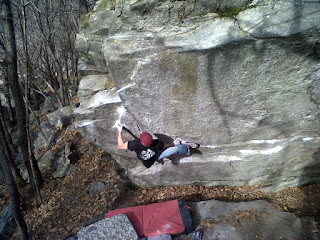 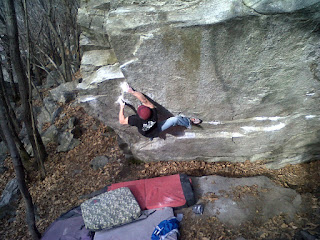 
I went back to Chironico during the past weekend, with my friend Filo. It's been good, finally with cool weather for a change!!!
One of the sectors I always go back to is "Paese", with the "Souvenir" boulder always in my sights.
This time, though, despite quickly doing "Souvenir" in two halves with the new sequence, I found myself under a nearby problem that I had always looked with reverence and never tried: "Komilator".
It's amazing, why did I wait so long to try it?
It's very simple: because it's hard, it's very crimpy, it's not exactly a short man's problem and finally because of its final dyno with the incredible swing out from the pads and down in the wood (if you don't slam into the tree).
Moreover, to try hard things on my own while with other climbers is not something that I love to do, so when Filo showed interest for this five moves beauty, I quickly forgot about the other problem and was more than happy to try this other Fred Nicole's testpiece.
The moves went without too hassle, but not without some good commitment. The second move, the one to the left hand crimp, is long for someone like me, and it took me a few goes to sort out a good sequence after trying matching on the rail and various feet placements. The heel hook sequence was immediately fine, and even better when I found a small but higher placement for my left foot. Then I didn't know what to do. The jump to the jug was out of question for me, too scary and too dynamic for my ability. I tried to squeeze harder - something that often pays dividends - and get the good hold further left; but then what? Still the jump? Right hand to the gaston arete?
Finally, I don't even remember how, I found myself cutting loose on those two holds, holding the swing, placing the left heel next to the left hand, and getting easily the top. Success. Now it was only time to put it together, but the second move was still a very low percentage one, like a 0% one.
The snow was falling, we were trying hard and everything was fine, apart from not climbing the problem. Filo, despite having spent the last months climbing 8a and 8b routes from Spain to Italy, left me completely speechless by getting immediately close to this boulder problem. Really really impressive, I got scared thinking about him climbing the problem and leaving me all alone there, thinking that I was the boulderer!!! Anyway we (he) got close, but we also got tired, cold and had to walk back to the car by headlamps.
Great day.
The following morning, despite some good sleep preceded by a ton of food in a Sicilian fast food/take away in Biasca, we were thrashed. Aching aching aching. That's what boudering in good, cold conditions does to you!
We warmed up with therabands in the sun at the campsite, then we set off. I was tired and insecure about what I should do. We weren't even sure if we were going to try again the problem, despite Antihydral our fingers were very worked!
With a relaxed athmosphere we warmed up gently, then we moved to "Komilator": at that point, while going for a pee, I suddenly felt different. My hands were warm, my skin was hard and dry, and my body felt powerful and ready. It was time. I was sure I was going to do it.
I sat down and I rehearsed. I climbed it in my mind and then moved. I fell on the second move. Damn. I didn't get distracted by this fact, and I forgot about it in a second. I went again.
The right hand hold, the good rail, was still a bit black and didn't feel good, but I did not care. Left heel, then fire to the crimp. I got it not perfectly, but I kept moving on. Right toe, left toe, squeeze, right heel. I was bolted to the holds. The right had crimp seemed a lot closer than the previous day and I was super solid. I heard Filo saying something like "Forte, forte!" and I got the left hand hold on the left, then I cut loose. "Merda!" I shouted, when my right foot brushed the pad, because it distracted me and I thought I was going to fall. Nope. I stayed there, Filo said something that I did not understand nor hear, then I heel hooked and toped out. I watched down, and Filo smiled. Then I stood there for a while, with my legs trembling. I could barely walk down. It was done. Despite the brushed pad, I had no doubts about my ascent. I really have to thank my friend Filo. I could climb the problem because he was firstly super psyched to go to Chironico, and secondly super psyched to try it and to give everything in order to do it.
For many, this problem could be something trivial. Something just worth a flash go. For me it was not.
It was a change, for a start. A change from plastic pulling and for the usual style of problems that I climb or try. A surprise.
Now I feel that I need to have more of these surprises in my life. Surprises in my climbing and surprises in the rest of my life, a big part that has been overlooked for too long.
I need to focus on my profession, to make it better; I need to focus on relationships, because the solitary life isn't fun; I need to be complete again.