Last Sunday, while driving towards Amiata, at some point I started noticing snow at the side of the roads, then some more, then even some more. When I arrived closer, there was half a meter of snow blocking the roads. At that very moment I thought that they day before, when I had phoned a friend who lives there to get some first hand informations about the snow, and when he had told me that there was half a meter of snow blocking the roads, probably some crucial part of that communication must have gone lost.
A quick phone call to the restaurant in Sassofortino made me know that there wasn't snow there, and down went the gas pedal. To be honest, there was some snow on the boulders, making the top outs impossible, but in a small range of five minutes walking, I had plenty of problems to throw myself at. I had done them all already, but some mileage on moderate 7's is always welcome to save a climbing day. It was sunny and freezing, and also very beautiful.
After a while I decided to have a go at an old problem opened by Keith during his visit here many years ago: "Giorni Scuri". I had done it with Keith, and haven't tried it again ever since, so I was very happy to repeat it quickly. Memories invaded my mind, filling it with images of a long lost period of freedom and irresponsibility; everything has changed now, and my approach to bouldering is less naive, less spontaneous and somehow less punterish. Then Nicco and Cristiano arrived, they warmed up and we started climbing together, with spirits super high. Nicco managed to also repeat Keith's problem, and to my surprise I finally freed an old project, ten years old to be honest, that I had cleaned ages ago with a German friend of mine. Clearly that small boulder has a feeling for foreign climbers! This nasty sequence is the left hand start to "Giorni Scuri", and packs in a few strong moves, very open and with an abs-wrenching heel hook. This problem was named "Commandos Tigre" and I am very happy to have done it. Time passes, and I am still here, progressing.
Some pics from my phone: Sasso in the snow. 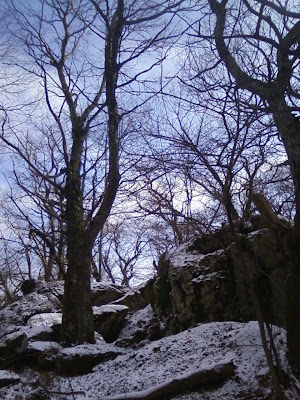 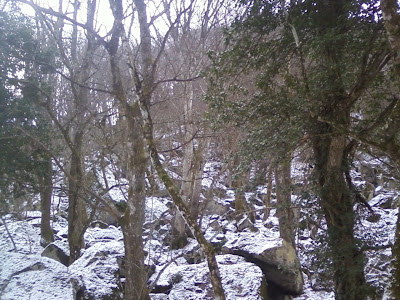 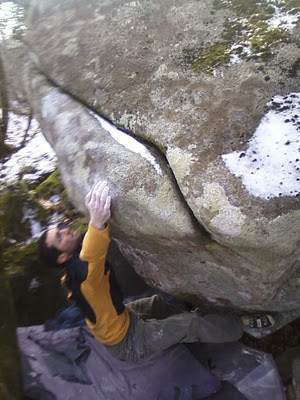 These are the images: the first move and the dyno of "Mind the Gap Sitstart"; the lower moves of "Islero". Yesterday I retroflashed the first one but wasn't able to repeat the second. Good. 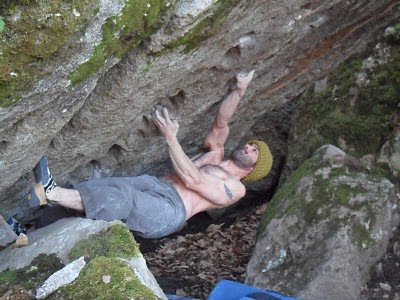 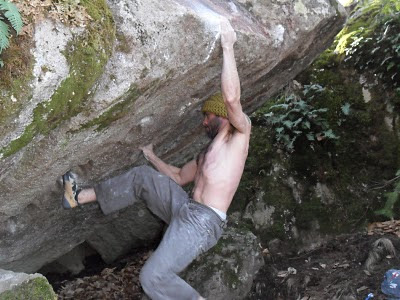 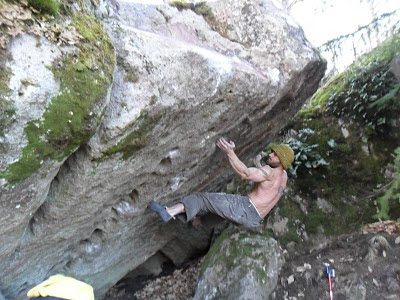 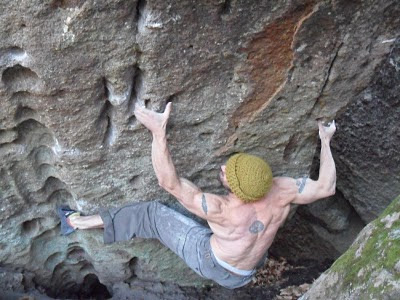 Now the reflections.
The thought of going to "Amber" on a single day trip, with an idea that wasn't just finding it, that is the idea of actually climbing the problem, was one of the fooliest thoughts I've ever had.
Simply, Font 8b is not my league. This doesn't mean that I won't climb that particular grade, it simply means that I have to try many, many different problems of that grade, until I find one that is particularly suited for me. The classic problem with my name on it. I just can't choose one problem because it's beautiful or because I won't need a spotter. I have to search and search.
I considered my "Amber Saga" an epic failure, in terms of the climbing itself, just because I didn't climb the problem. Reality is that it's just absolutely normal. But I am so stupid that I almost - almost - gave up on the idea of Font 8b, after that. It took my friend Filo's good sense to make me understand how much out of reality I was: he asked me "How many problems of that grade have you tried?" and I replied "One". He asked again "For how long?" and I replied "30 minutes". And it all became clear. I was out of reality, thinking that it was going to be possible that way. No, it will involve much more tears and toil than just driving 1000 kms and wandering in the snow for a few hours. That would have been simple.
So, the quest is on.

Then, the actual climbing. I feel good. I am still glowing in the bright light of triumph, that triumph that marked the beginning of the year, my glorious day at Chiesina. What a day. Perfect. There are not many days like that one in a year: the form, the conditions, the mind, the idea. I am glad I spent it there.
What I did in reality is not much. Just two moves. Naturellemont, these two small moves, just as the butterfly of the Chaos Theory, spun out enormous consequences.
Driving to the boulders, in that perfect light, I found myself wondering which was the best way to spend the day: after all, I had already done everything I wanted to, and the project that is still there, is far beyond my chances, for many reasons. Suddenly, clear as the sky, the idea appeared: I am going to repeat the roof direct, adding the first two moves (they had been skipped by the first ascensionist, who didn't like that crouched start). Boom.
The first ascent was made starting from the ramp, with three easy moves to the jug that marks the start of the difficulties. All subsequent ascents, to my knowledge, had been done starting from the jug itself, avoiding the greasy ramp. But the first two moves remained intact.
So, as you see, nothing special. Two "easy" moves into three easy moves. But it's not the moves, it's the form. In my mind, I took it back. Like a long lost son.

Finally, to make that day even more perfect, I conceived a new project.There's a hard line somewhere, and a possible different start. An eliminate for sure, given that I decided to ban a really good feature that would be perfect for the feet, but I don't care. The moves are great. The full problem will gain 5-6 moves, going up to 15-16 moves. Power endurance, innit? More power than endurance: yesterday I had my third session there, and I still haven't climbed the new start in a oner!!!

Sometimes I get a bit bored by all the difficulties of climbing: the spare time, the driving, the solitude. Now I know: a bored boulderer is a boulderer with no fantasy. There's always a new move to imagine.

It's so difficult to try and give the idea of the chaos that's in my mind. Once again I had a real emotional rollercoaster during the holidays, and once again I had the confirmation of how deeply and strongly climbing dominates my life. Plagued by bad weather, the last two weeks had been a struggle, that led me to drive more than one hour just to go to the gym, and this twice a week. Obsessed by the lack of other training facilities, when the gym was closed I simply couldn't help but mount back up my old fingerboard that I had at the sea years ago. Just a couple of sessions on it reminded me why the Beastmaker is the best fingerboard in the world.
Naturally, this tension didn't do any good to my relationship.
In my thoughts, I was growing weaker and weaker by the minute.
Then, moreover, I couldn't make up my mind about my Cresciano trip, that evolved from a 10 days stay, to a 5 days one, to 4, to 2, to nothing.
I got a phone call from work on Sunday night, and I am already back at school.
But...
There's always a "but".
But yesterday I went climbing, with the bluest sky ever seen and the hottest January sun. And it's been magic, to soak up all this beauty all alone as ever.
I fucking crushed.
KEEP THE FUCKING FAITH.
Posted by lore at 11:20 1 comment: